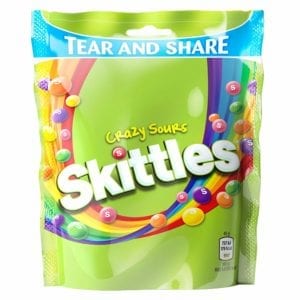 Uniquely Skittles are perfect for family sharing. Taste the Rainbow with bite sized chewy sweets with a colourful candy shell. The candy is fruity with crunchy case and soft fullness. It offers fun chewing fun and much less sour than the red skittles pack! It is perfectly suitable for vegetarians. 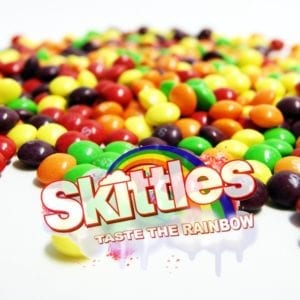 Skittles is produced and marketed by the Wrigley company, a division of Mars, Inc. Skittles is a fruit flavoured candy consisting with hard sugar shells imprinted with the letter “S”. This candy has been sold in various flavoured collections including Deddert, Wild berry, Tropical and sweet heat and sour. The interior of the candy consists of sugar, fruit juice, citric acid, natural and artificial colours as well as corn syrup and hydrogenatedpalm kernel oil.

Skittles was originally made by a British Company in 1974. The candy was first introduced in North America in 1979 as an import confectionery. In 1982 Skittles’ domestic production began in the USA. The “taste the rainbow” theme was created by New York ad agency D’arcy Masius Benton & Bowles. The original Skittles were orange, lemon, lime, strawberry and grape. Although the original Skittles are no longer sold in the US, the company labels their packages as if they are original.

Furthermore earlier products tended to focus on fruit flavours.  However the more recent products have bifurcated to include flavours such as bubble gum, chocolate, popcorn, mint and sours. In March 2009 the company launched a web-based marketing campaign.  Their official website became an intersection between their social media sites including Youtube Channel links, Facebook profile and a Twitter account. Skittles has one of the most liked facebook pages with 25m followers. The page’s success is most likely driven by the eccentric posts.

Moreover, Skittles are produced in a wide choice of colours and flavours including the sour variety. The company hints the new flavour releases via its facebook page. Skittles replaced the lime flavoured candy with green apple instead in 2013 which subsequently created a backlash with some consumers. Uniquely lime was shifted to their Darkside packets which became discontinued in 2015 followed by their Orchards packets which were discontinued in 2017. Additionally Lime is now currently part of the “Long Lost Lime” packets that came out in summer 2017 and 2018. 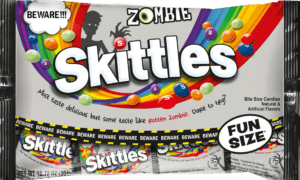 Zombie Skittles are very similar to the original bag of skittles but with a spooky twist. In addition the parent company recently announced that this candy will be available in 3 different sizes:

Also Mars Wrigley Confectionery has confirmed that you will be able to get your hands on this candy in October 2019. It will be available nationwide at your local grocery stores and food retailers. Moreover these are perfect to distribute to trick or treaters for the next Halloween.  Unless you are a skittles lover in which case you can keep these for yourself and your family.

Another great Skittles product to keep your eyes on for next year is called Skittles Darkside. So why is this product called Darkside and what does it contain? Likewise see for yourself below the mouth watering flavours that you will be able to find in this pack: 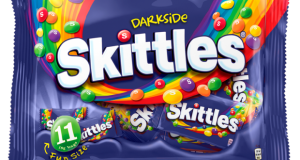 Not to mention Skittles Darkside contains a slight bold fruit taste. As a matter of fact the candy was launched in the UK in 2015 as a limited edition flavour. However it was discontinued in 2015 and re-launched in 2016 for Halloween only. Furthermore we expect this product to return again sometime in 2019.