Detroit is the largest city in Michigan. Detroit is one of America’s oldest cities, having gone through much in its 300-year history. Known as the “Motor City”, Detroit is the home of the automobile industry, yet it is also famous for its music, sports, history, and culture. Rebuilding after some tough times, Detroit’s residents have created a vibrant, diverse city that is worth visiting.

From the shores of the Detroit River and its bustling downtown, to its diverse, unique neighborhoods and outer suburbs, Detroit is chock-full of attractions, museums and fun events. While not on everyone’s radar as a major tourist draw, Detroit deserves to be on the list of American cities to visit.

Where is Detroit located on the US map? 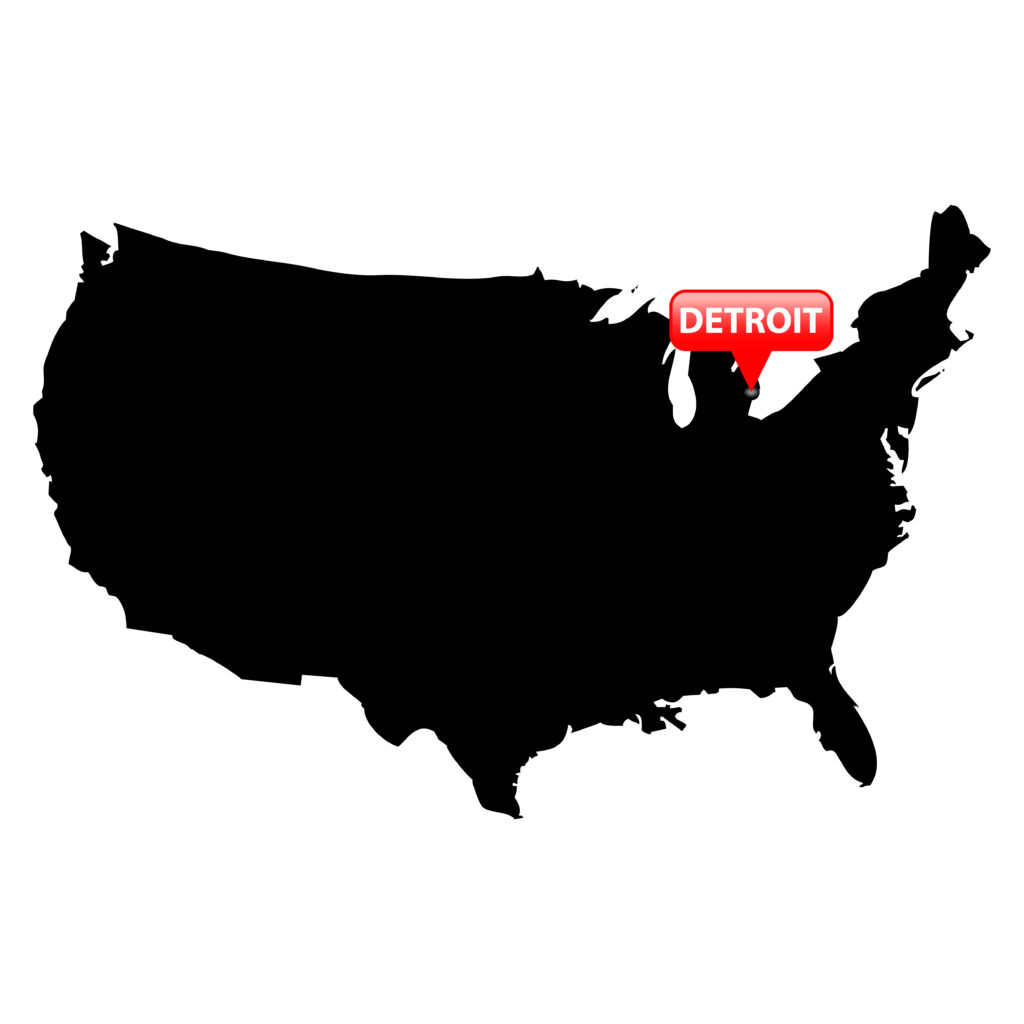 What do I need to know before visiting Detroit?

How do I get to Detroit?

Detroit is served by a large international airport, Detroit Metropolitan Wayne County Airport, which is located about 21 miles from the city center. If visiting Detroit from this airport it is best to travel by rental car to the city.

Detroit is in the upper midwest of the U.S.. Summer temperatures (May – September) average above 73 degrees F and winter temperatures (December – March) average below 42 degrees F. The best time of year to travel to Detroit according to Weatherspark.com is mid June to mid September. The coldest month of the year is January, and the hottest month is July.

In what time zone is Detroit?

What language is spoken in Detroit?

The main language spoken in Detroit is English, however, due to the diversity of the population many languages in the neighborhoods of Detroit are spoken. These include Arabic, Spanish, Chinese, Burmese and Bangla.

What is the currency used in Detroit?

The currency used in Detroit is the U.S. dollar.

What is the best way to get around in Detroit?

If you plan on visiting the city’s many neighborhoods and regional attractions, the best way to get around is by car. After all, Detroit is known as the “Motor City”! However, for transportation within the downtown area, the People Mover is a great option, with 13 stations arranged in a loop around the downtown. Even better, a one-way fare on the People Mover is only 75 cents!

How big is Detroit?

What are some things to do and places to see in Detroit?

A must-visit in Detroit is the Motown Museum. Housed in what once was the recording studio of Berry Gordy Jr., “Hitsville U.S.A.” is the home of the Motown music genre made popular by musicians such as Stevie Wonder, The Temptations and many others during the 50s and 60s. The Motown Museum is currently undergoing renovations, check their website before visiting.

Eastern Market is a marketplace that has been ongoing since 1891. While their Saturday Farmer’s Market is perhaps their most famous, Eastern Market holds markets on other days as well, making it a great choice to go and explore any day of the week. Strolling around the historic buildings in this district, you will find locally grown foods, unique boutiques, delicious restaurants, and talented artisans and craftspeople.

Detroit Institute of the Arts (DIA)

The DIA is one of America’s premier art museums. When visiting, be sure to stop by the world-famous “Detroit Industry” murals painted by Diego Rivera during the Depression. However, set aside plenty of time for this historic museum, especially if you are an art lover, as there are more than 65,000 items in their collection!

Belle Isle is a 982-acre island park on the Detroit River. Accessible by road, Belle Isle is home to a beautiful State Park, the Belle Isle Aquarium, a conservancy, the Great Lakes Museum, the Detroit Yacht Club and more. A must-visit for nature lovers and history buffs alike, Belle Isle feels light-years away from the big city, when in fact it is close and easily accessible from downtown Detroit.

A short drive away from Downtown Detroit is the historic and fascinating Detroit Zoo. Located about two miles north of the city limits, the Zoo is home to over 3,000 animals on 128 acres of land. Founded in 1928, the Zoo is known for its Penguin Conservation Center which recently reopened to the public.

Detroit is made up of many unique and diverse neighborhoods, some of which are actual cities within a city! A visit to Detroit is not complete without visiting at least a few of these distinctive neighborhoods.

Corktown is the city’s oldest neighborhood. Formerly home to a large working-class Irish population, Corktown is now known as a hip and trendy area, with cool boutiques, hotels, restaurants and bars. Luckily, the history of the neighborhood has been well-preserved in its homes and businesses.

Greektown is home to Detroit’s cultural and entertainment district, and home to the Greektown Casino. This neighborhood was traditionally home for Greek immigrants, and has a beautiful historic Victorian street as well as a glitzy casino. Greektown is known for nightlife, gaming and great restaurants.

Hamtramck is actually a city in a city, completely surrounded by Detroit. Historically home to Polish immigrants who worked in the auto industry, Hamtramck now has a distinctly multicultural feel, with Middle-Eastern and Asian influences as well as Polish. Hamtramck is the most densely populated city in Michigan, so expect close-knit neighborhood streets!

Why does Detroit get such a bad rep?

Will I feel safe in Detroit?

If you take some time to research before you go and have a plan, Detroit is no more dangerous to visit than any other large city. Its unique history and vast cultural influences make it a great destination city.

What is Unique to Detroit?

Map of Chandler, Arizona Area | What is Chandler Known for?

Where is Columbus (Ohio) located on the map? Is Columbus worth visiting?

Planning on visiting or moving to Ohio’s capital city? Here’s all you need to know about Columbus. […]

Are you thinking of traveling to New York City? Learn everything you need to know about the five boroughs. […]