Based on its own unique Island, Burj Al Arab Jumeirah includes ultra-luxurious suites overlooking the sea. Furthermore the hotel comprises of 9 signature restaurants and an opulent full-service spa. Guests have the choice to arrive at the property by either one of the world’s largest chauffeur-driven fleets of Rolls-Royce’s or by a dedicated helicopter transfer service. Not to mention, the terrace offers two swimming pools, a restaurant, bar and 32 luxury cabanas. 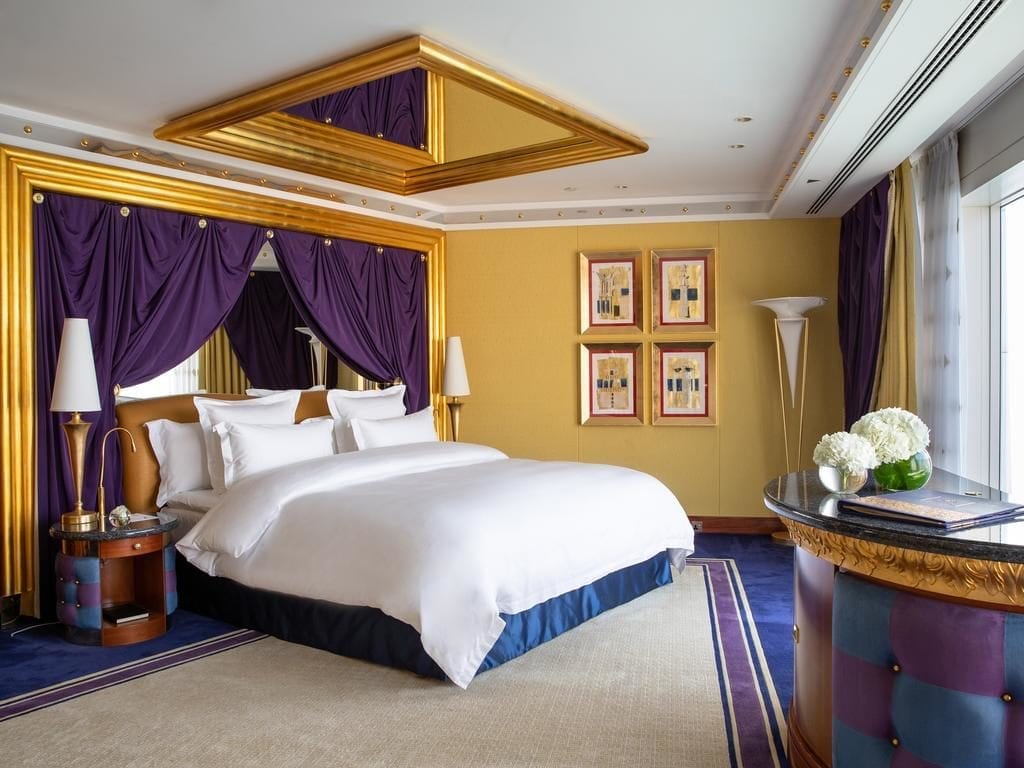 Each suite includes an iPad, a 21-inch iMac, complimentary wi-fi and widescreen interactive HD TV. There is also a Bose iPhone docking station and media hub is also available. Moreover, the suites feature floor to ceiling windows with panoramic view of the Arabian Gulf.

Burj Al Arab is  managed by the Jumeirah Group and despite its size, the hotel holds only 28 double-story floors which can accommodate 202 bedroom suites. Not to mention, the smallest suite occupies an area of 169 m2 (1,820 sq ft), while the largest suite covers 780 m2 (8,400 sq ft). The Burj Al Arab is very popular with the Chinese market, which accounts for almost 25% of all bookings at the hotel. Not to mention, The Royal Suite,  can cost US24,000 per night, was listed at number 12 on World’s 15 most expensive hotel suites compiled by CNN Go.

The Burj Al Arab is a five-star hotel (highest official ranking) while the hotel is sometimes erroneously described as “the world’s only seven-star hotel.” However, the hotel management claims never to have done that themselves. Jumeirah Group claims that the specific phrase stating it as a 7 star hotel is not encouraged and has never been used in their advertising.

“Burj Al Arab” which in Arabic means Tower of the Arabs is a luxury Hotel based in Dubai, United Arab Emirates. The famous Burj Al Arab sits on an artificial island which is 280m from Jumeirah Beach. The hotel is connected to the mainland by a private curving bridge. The hotel is designed to resemble the sail of a ship and  is considered as the fifth tallest hotel in the world albeit 39% of its total height is made up of non-occupiable space. Furthermore there is a helipad near the roof at a height of 689 feet above ground. The hotel design is very similar to Vasco da Gama Tower located in Lisbon, Portugal. 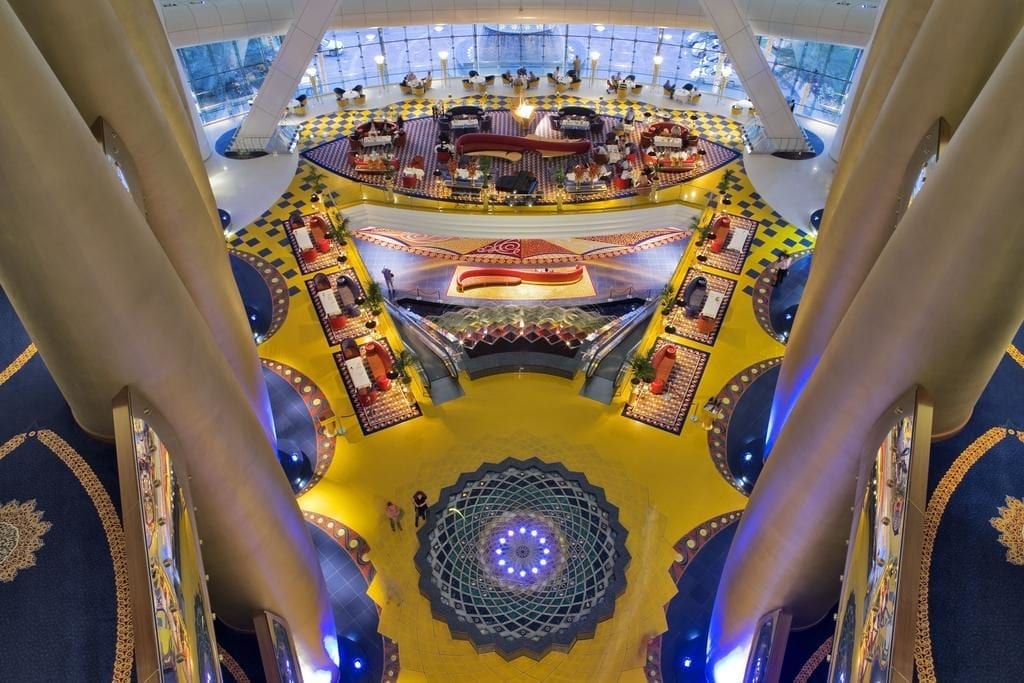 The beachfront area where Jumeirah Beach Hotel and Burj Al Arab are based was previously known as Miami Beach. The hotel was designed by a multidisciplinary consultancy called Atkins which was led by architect Tom Wright, who subsequently became the co-founder of WKK Architects. The Construction project of the island began in 1994 and involved almost 2,000 workers during peak construction.  Design and the construction project were managed by Canadian engineer Rick Gregory also of WS Atkins.

Complex engineering feats were required in order to achieve several hotel features. The hotel sits on an artificial island constructed 280m / 920ft offshore. In order to secure a foundation, the builders had to drive 230 40m /130ft long  concrete piles into the sand. The engineers had to create a ground or surface layer of large rocks, which is circled with a concrete honeycomb pattern, serving to protect the foundation from erosion. It took fewer than three years to construct the building itself while it took three years to reclaim the land from the sea. 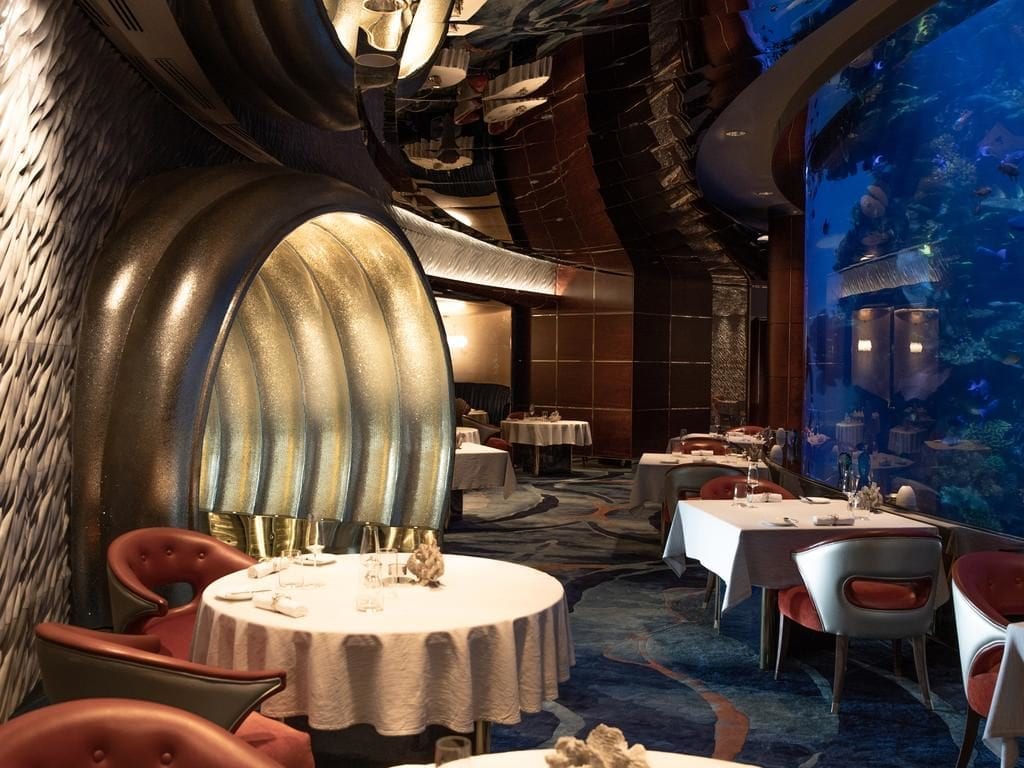 Al Muntaha is the hotel’s signature fine dining restaurant serving contemporary European cuisine. Al Muntaha (“The Ultimate”), is supported by a full cantilever which extends 27 m from either side of the mast, and is accessed by a panoramic elevator. It is located 660 ft above the Persian Gulf, offering a view of Dubai.  Al Mahara (“Oyster”), can be accessed via a simulated submarine voyage. It features a large seawater aquarium, holding roughly 990,000 L of water. The tank’s wall is made up of acrylic glass in order to withstand the water pressure. Alternatively the Sky View Bar is suspended 657 feet above sea level and is ideal for afternoon tea and cocktails

The famous Burj Al Arab has attracted criticism as well contradiction of sorts related to the hotel’s decor considering how well-designed and impressive the construction ultimately proves to be. The hotel as well as city of Dubai have been heavily criticised due to the power of excessive wealth, triumph of money over practicality which elevate style over substance.

Several events have taken place over the last 2 decades on the helipad above ground to attract media attention. Such events include Tiger Woods teeing off in 2004 while Andre Agassi and Roger Federer was playing tennis in 2005. Ronan Keating shot the Music Video for his single “Iris” at the Helipad of Burj Al Arab in 2006 whereas in 2011 Golfer Rory McIlroy performed a bunker shot. In 2013 there was Heli-lift of Aston Martin Vanquish and in the same year David Coulthard performed donuts in a Formula 1 race car. Furthermore, the famous hotel has featured in several Bollywood movies as well as Hollywood movies such as Mission Impossible – Ghost Protocol.

Things to do inside Burj Al Arab

Burj Al Arab is the perfect setting for families. It offers unlimited access to the water sports activities at Wild Wadi Waterpark. The Water Park is based within a 5-minute walk across the island bridge. Additionally, Souk Madinat Jumeirah is a 15-minute walk away.

You can visit the Talise Spa. It  has been carefully crafted and exclusively developed using the world’s most luxurious products. Not only will you feel pampered but also rejuvenated. The Spa facilities include separate indoor infinity pools, hot tubs , saunas, steam rooms and plunge pools. The treatment rooms overlook the Arabian Gulf. Both ladies and gentlemen’s relaxation areas feature an aqua retreat.

You can take a wonder around the Summersalt Beach Club which is exclusive to Jumeirah Al Naseem and Burj Al Arab Jumeirah suite guests. However you will be accommodated on a first come, first served basis.

Furthermore, all guests will have exclusive access to the newly refurbished and the perfect beachside spot at Jumeirah Beach Hotel private beach. It offers sun loungers, brand new cabanas and  magnificent views of Burj Al Arab Jumeirah and the Arabian Gulf.

The Ritz London – One of the best hotels in the world

Why Atlantis The Palm is Worth Visiting?

About LK 738 Articles
Hi and welcome to my travel blog! Based in London, I work in investment banking in a quantitative field and although I am not part of the travel industry, I have a ton of passion for travel. My blog is a reference guide for my fellow travelers with the same passion as me. Hopefully the blog is easy to navigate and my aim is to bring the most relevant and interesting information before you begin your journey!

Why Atlantis The Palm is Worth Visiting?

Although, Atlantis The Palm in Dubai, has not been around for so long, this place has gained a lot of reputation within a short time.  This hotel lets you go into another world which offers its visitors a vast expanse of beach, high-class facilities, and water parks for making the vacations memorable.  Not to mention. the Atlantis plays an essential role for different TV shows and films and some of the video games as well (continue reading for full details). […]

Do you want to visit Dubai, but don’t know about the best luxury hotels in Dubai? A lavish and expensive city of the United Arab Emirates, Dubai is known for its beautiful architecture and desert landscape. […]