The name Argentina is derived from the Latin word ‘Argentum’ which means silver. Spanish explorers who first came to Argentina were greeted by natives with silver objects and ornaments. Thus, Argentina got its name. The capital city of Argentina is Buenos Aires. The national language of Argentina is Spanish, and its currency is called Peso (ARS). 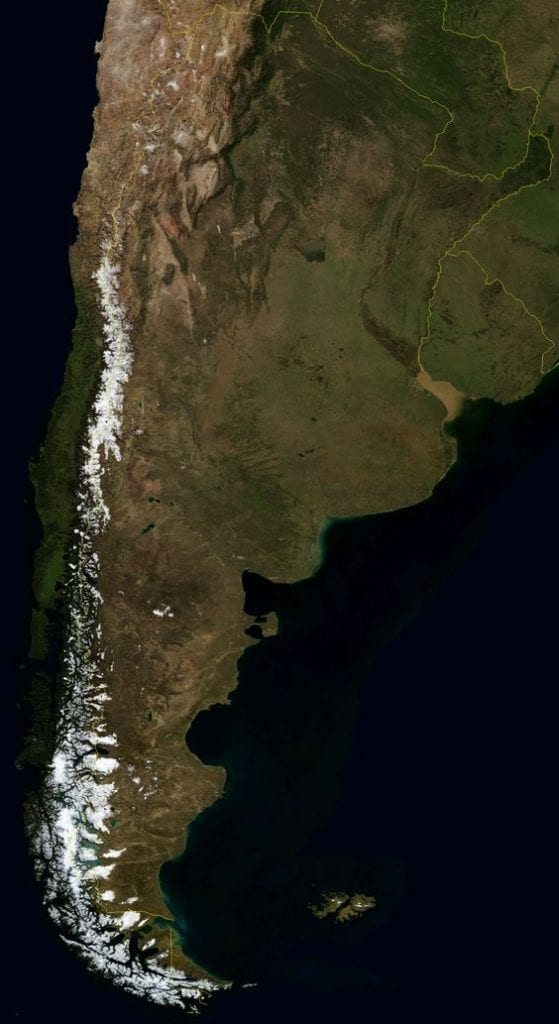 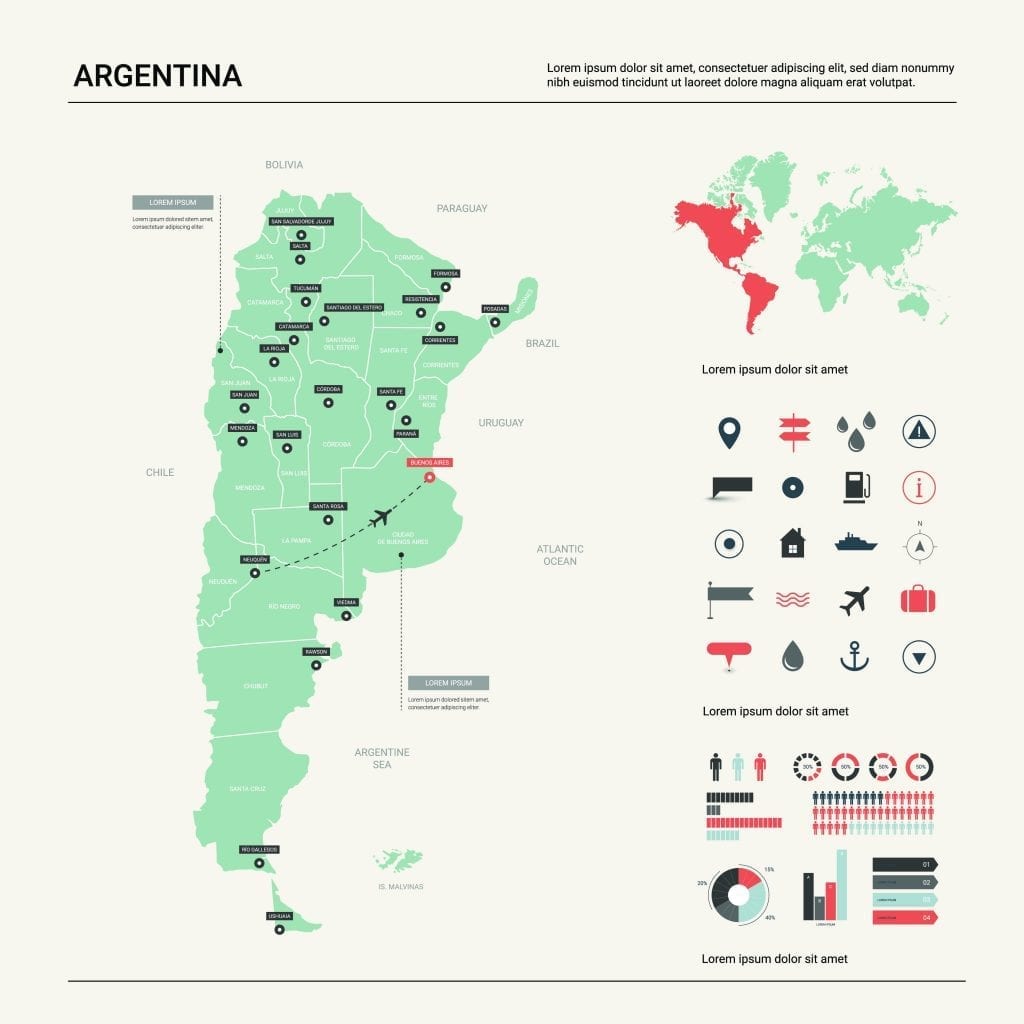 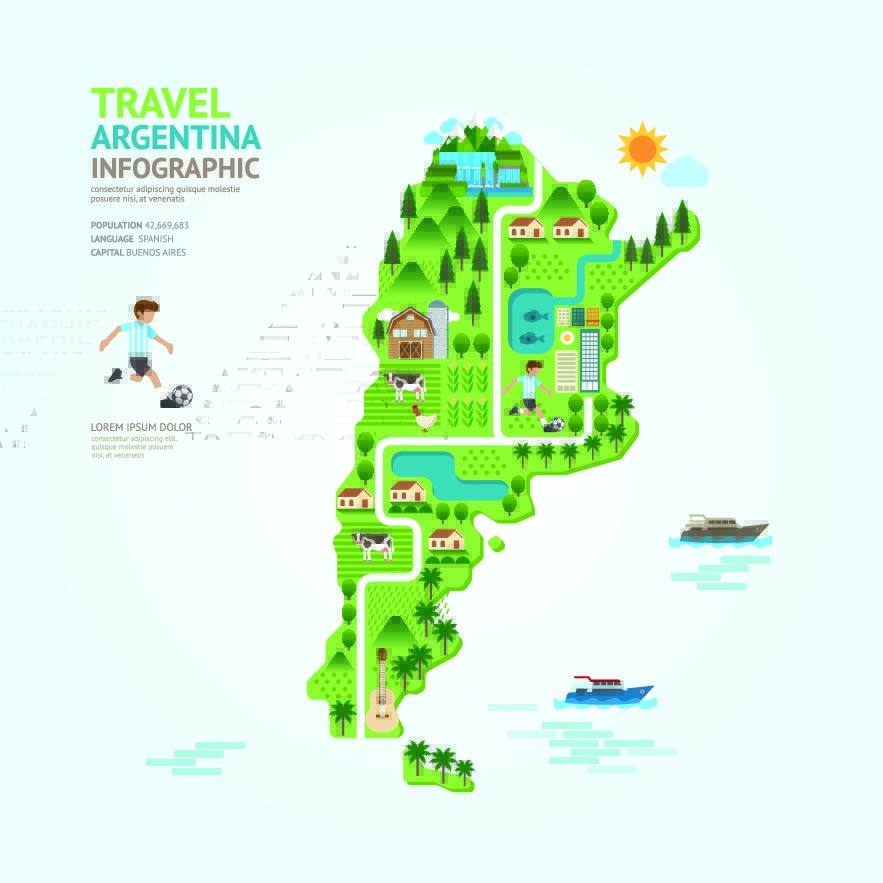 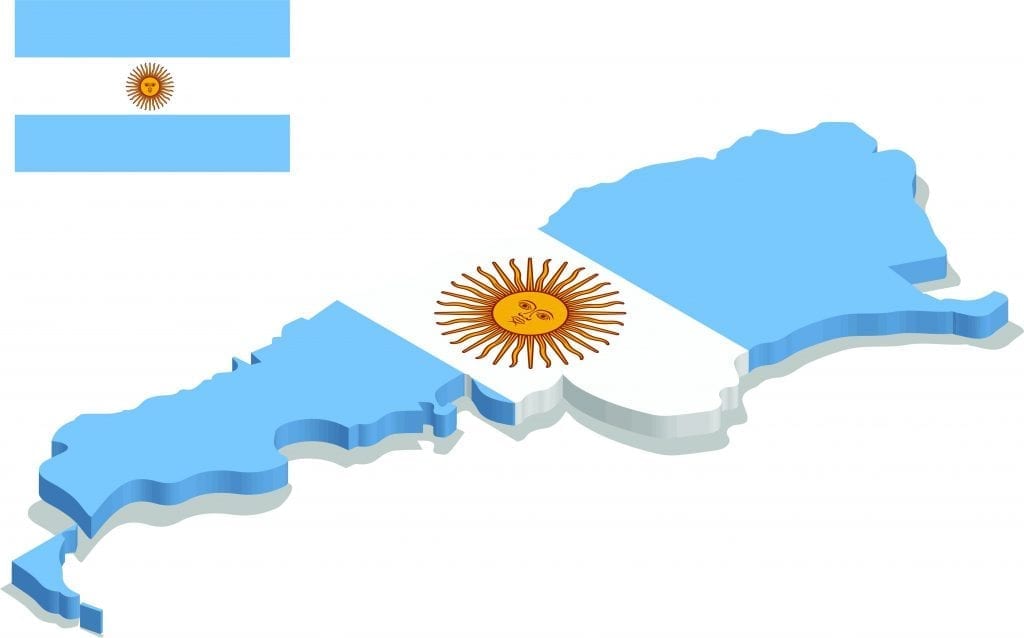 Argentina lies in the Southern part of South America. It shares its borders with Bolivia and Paraguay to the north, Chile to the west, Brazil to the northeast, Uruguay and the South Atlantic Ocean to the east, and the Drake Passage to the south.

Map of Argentina and its borders

Geographically Argentina can be divided into five diverse parts.

The major rivers in Argentina include the Parana River, Paraguay River, Uruguay River, Negro River, Colorado River, and Salado River. Rio de la Plata is a basin formed in the Atlantic Ocean by the joining of the Parana and Uruguay Rivers. Argentina also hosts the famous Iguazu Falls along with Brazil, which is one of the largest waterfalls in the world. 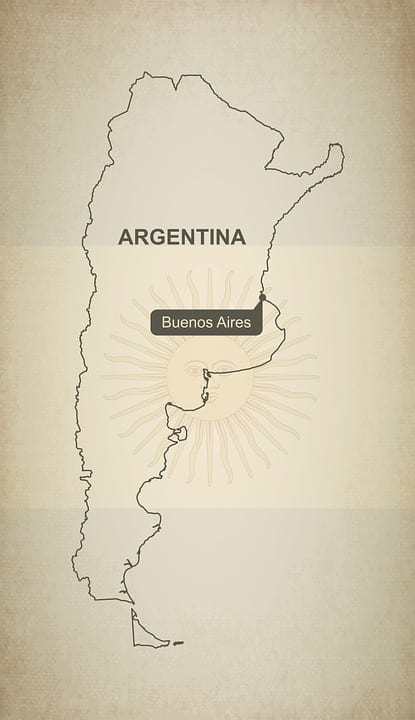 The climate of Argentina varies going towards the south. Most of Argentina falls under the temperate zone. However, the southeast has a small arid area, whereas, the southwest is extremely cold and dry and has a sub-Antarctic climate.

Argentina has four distinct seasons. Summer stays in Argentina from December to February, while autumn stays from March to May, followed by winter from June to August, and lastly, spring stays from September to November. Generally, summers throughout the country are warm and humid except for Patagonia, where the summers are dry. In the north, the winters are mild, whereas the south of Argentina faces snowfall often.

Since 11,000 BC Argentina was inhabited by indigenous groups. In 1502, the first of the Europeans led by the Italian Amerigo Vespucci landed on the shores of Argentina. The arrival of Spanish was in 1516 and 1526 when Spanish explorers Juan Díaz de Solís and Sebastian Cabot reached Argentina. Spain was the first to finally build a colony in Buenos Aires in 1580, after much resistance from other nations.

The Spanish continued to expand their reign in Argentina throughout the 1600s and 1700s. They established the ViceRoyalty of Rio de la Plata in 1776, and Buenos Aires became its capital. Revolutions for independence started in May 1810 once Argentina learned about Napoleon’s invasion in Spain. Argentina finally declared its independence on 9th July 1816.

Argentina fought the Paraguayan war under the Triple Alliance pact with Brazil and Uruguay from 1864 to 1870. In 1870, Argentina started The Conquest of the Desert, under the leadership of General Julio Argentino Roca, which was aimed at bringing Patagonia under Argentinian leadership. After the conquest, Roca was elected as the president.

From 1870 to 1930, Argentinian politics and the economy saw a lot of ups and downs. Leaders who came to power tried to solve the economic slowdown. Finally, in 1946, Juan Domingo Perón took over Argentina after overthrowing the constitutional government. His political movement was termed Peronism, wherein he tried to improve the economy by nationalising industries. Peron was re-elected in 1952 despite his efforts to suppress the media and the opposition.

In 1955, Peron was overthrown under a military coup and was exiled. However, military rule was overthrown in the next ten years. Peron’s party regained power in 1973, and Hector Campora became the President. However, Campora resigned, and Peron returned to the Presidency the same year. His reign ended with his death in 1974.

After Peron’s death, the military took control of the government. The Dirty War was led by General Jorge Videla, wherein left-wing extremists were brutally murdered. Till 1983, the military rule killed around 10,000 people.

In 1983, Raul Alfonsin was elected as president, marking the end of the military rule. He brought back some stability in Argentina; however, after his term, Argentina once again spiraled down. Finally, in 2003, Nestor Kirchner was elected president. Under his guidance, Argentina has regained its economic and political strength. The political stance of Argentina changed with the death of Kirchner in 2010.

Mauricio Macri won the presidential elections on 22nd November 2015. He is the current president of Argentina. Macri is known to be involved in the famous Panama paper scam wherein leaders from other countries used offshore companies to evade taxes. He has not been convicted to date.

Argentina has a rich culture and a flourishing ecosystem that attracts tourists to this incredible country. Here are some of the must-visit places in Argentina.

Why Argentina flag is so unique? 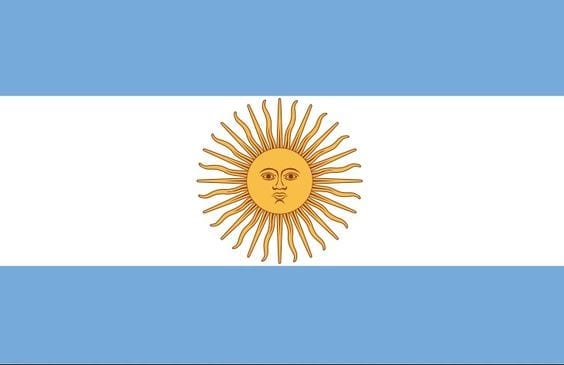 In ancient history, flags were utilised to represent high-rank people and kings. The flags are lifted up in the wars or when the armies come out for any purpose. The flag identifies the nation, and it is the recognition of the country. Rulers encourage their nations and the public with the use of the flag. These are designed in a way that signifies and narrates the meaning of the nation’s slogan.

The use of colours, lines and symbols, each has its meaning. Nations always fight for the pride and respect of their flags. They always keep in mind that the flag is the representation of their ideals. It is a sign of their high morale. The use of flags helps armies to recognise enemies and allies. It is vital to give reverence and honour to the flag of the country. Some of the facts about the Argentina flag are given below that make it unique from other flags.

Like other nation’s flag, the flag of Argentina contains some symbolic meanings. It is separated into three bands in horizontal white and light blue. At the centre of the white band, it contains the sun of May. Argentina’s Flag  describes the sacrifices and history of the people that they have made for the country. The flag was first raised in 1812 and the sun was added in 1818.

Meaning of the Argentina Flag

Argentina Flag boasts a simple design. There is no complication in the formation of the flag. The easy to understand design contains significance and symbolism behind its formation. In white and blue triband on the flag leads the revolution against Spain. The use of both colours white and sky blue are the signs of blue sky opening exposing white cloud. It contains Sun Of May on the flag and was included in the design after some time. The Sun symbolises the Inca sun god Inti.

Colours of the Flag

Argentina flag contains three colours and the features in the background; the triband is in horizontal shape. These are formed in the two colours and light blue stripes.

The flag is hoisted on the Government buildings and institutes around the year. Argentina hoists the flag on National Day, celebrations and other National events as it is the recognition of the country and nation. This is the reason; the flag is fixed on the government authorised officers vehicles. Diplomats also use the flag on their cars.

All the nations are recognised with their flags. These flags are used to identify the presidents and Government officers on international platforms. The symbols and the use of the colours are formed carefully because it describes the ideals of the nation. This is the reason; all the nations do not compromise on it. Each and everything on the flag makes it unique and prominent among other nations. In Argentina, the flag hoisting ceremony is held on the national level on their national day and other national events.

Provinces and Capital City of Argentina

Other Important Cities of Argentina

BOOK ACCOMMODATION IN ANY PART OF ARGENTINA AT GREAT PRICES

About LK 740 Articles
Hi and welcome to my travel blog! Based in London, I work in investment banking in a quantitative field and although I am not part of the travel industry, I have a ton of passion for travel. My blog is a reference guide for my fellow travelers with the same passion as me. Hopefully the blog is easy to navigate and my aim is to bring the most relevant and interesting information before you begin your journey!