In this article we are going to explore the southern portion of the Western hemisphere, which is also recognised as the new world by the Europeans. Yes! We are talking about the fourth largest continent on Earth, South America. In the northwest of this triangular-shaped continent, you will find the Gulf of Darien while the Tierra del Fuego archipelago or the Fireland lies in the southern part of this continent.

How South America was formed?

South America is one of the most intimate study areas for many renowned geographers and scholars across the world. Did you know how this superior land received its name? Well, there is an interesting story behind it.

Have you heard the name of Amerigo Vespucci before? Yes! Of course! He was an Italian navigator and also the first European who discovered America as a separate landmass excluded from East Indies. Just because of him people started recognising Isthmus of Panama’s south portion as South America. So North America and South America were named after this brilliant European, Amerigo Vespucci.

If you take a closer look at the map of South America, you will find that this superior continent is home to many diverse people. Venezuela, French Guiana, Columbia, Brazil, Argentina, Guyana, the Falkland Islands, Suriname, Paraguay, Ecuador, Chile, Bolivia, and Peru are all parts of South America.

The distribution of natural resources and civilisations happened because of this brilliant landmass and the people of this continent. These boundaries will help you to understand the geographical and cultural differences in a better way. 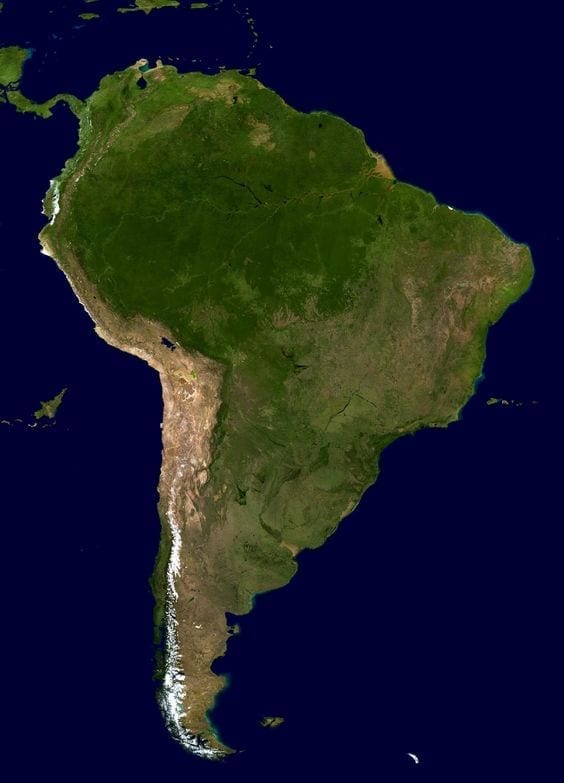 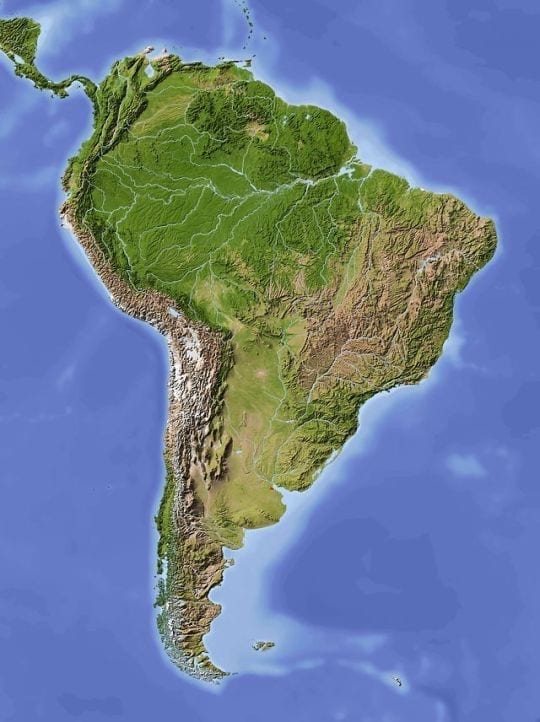 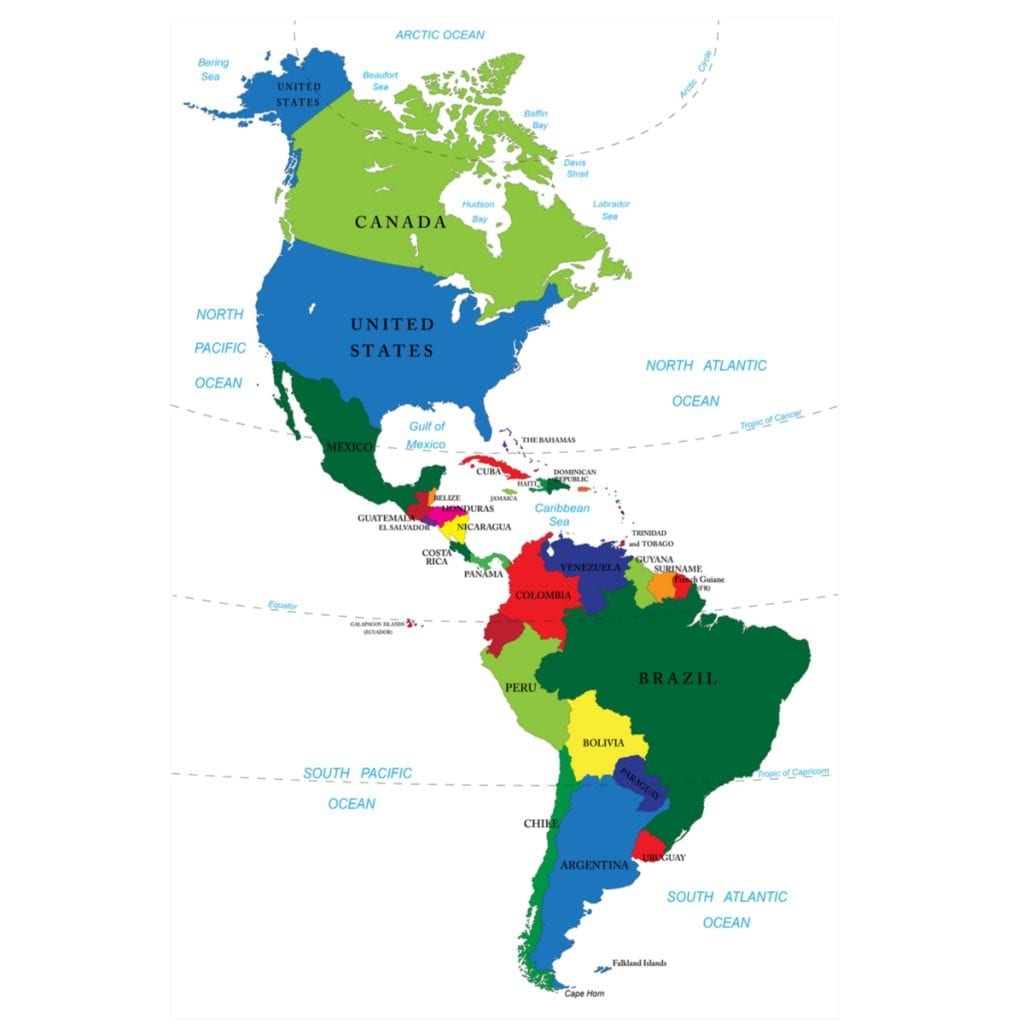 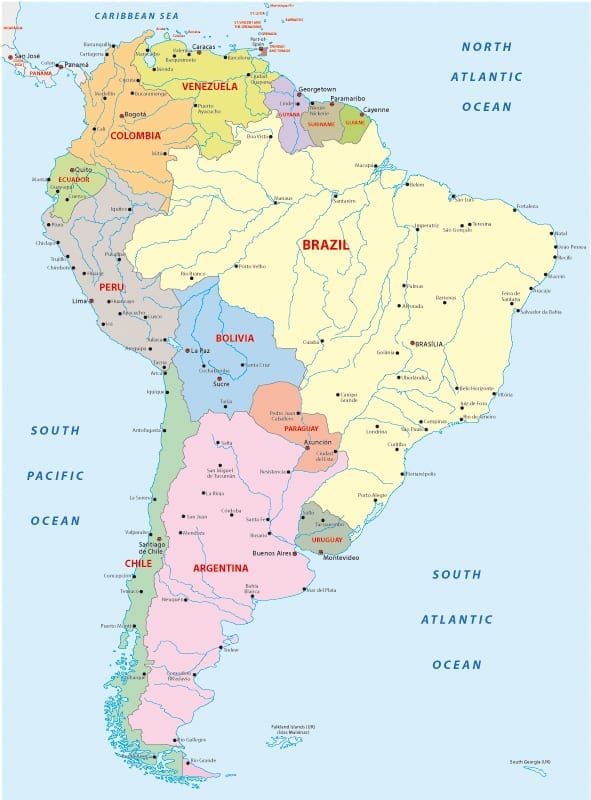 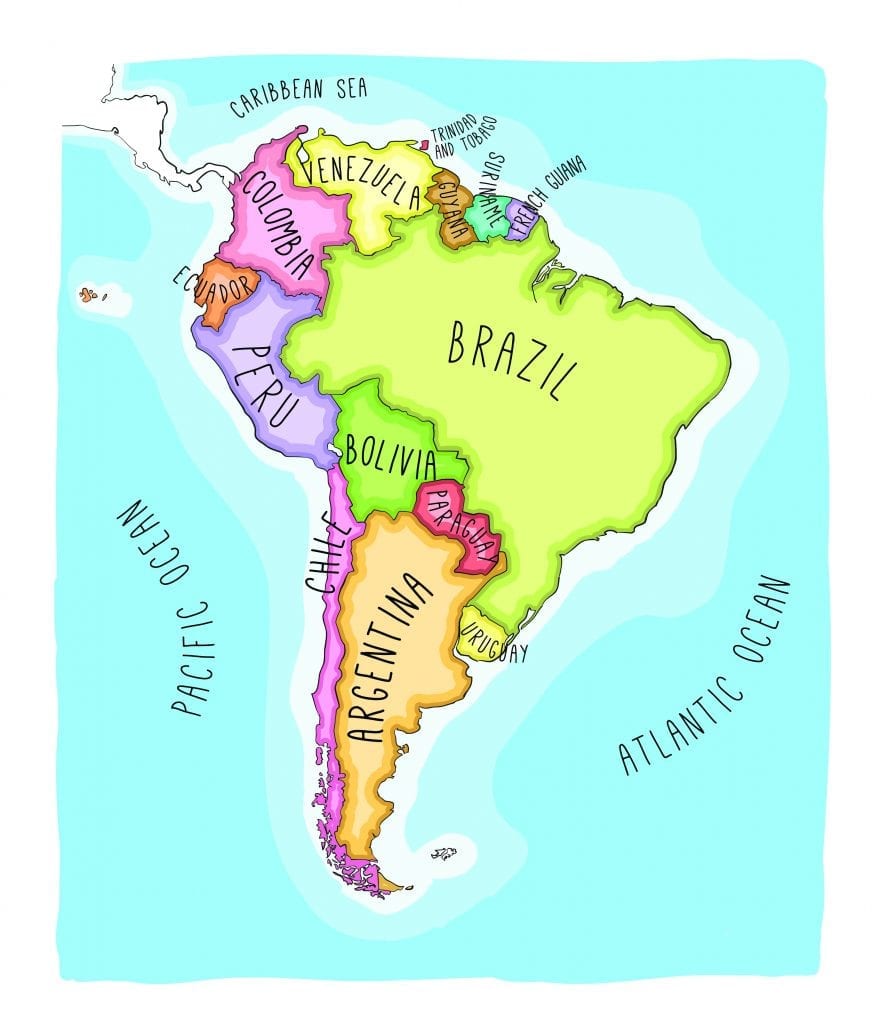 If you compare the continent of Europe, Australia, Antarctica and South America, you will quickly understand that South America is much bigger than these three. On the other hand, the physical area of South America is smaller than both Asia and Africa. After comparing the physical space, it is also found that this continent is also much smaller than North America. The eastern border of this continent is the Atlantic Ocean while the Pacific Ocean is considered to be the Western border of this magnificent continent. If you take a look at the northern part, you’ll find the Caribbean Sea which is also considered as the northern boundary. On the other hand, Isthmus of Panama separates South America from its neighbours.

If we are exploring the physical regions of this continent , how can we forget its amazing Islands? Let’s start our journey with Galapagos Island. This beauty is a proud part of the Ecuador country. Next, we have the Falkland Islands or Malvinas. You’ll find this island in Argentina’s southern coast part. Although this Island sits in South America, Great Britain controls this as an overseas territory. Argentina has already fought a battle with Great Britain to include the Falkland Islands in their territory but did not succeed.

Furthermore, the noted Robinson Crusoe Island and Easter Island are found in the Pacific Ocean. Both these islands are controlled by Chile. Not to mention the Dutch islands of Curacao, Bonaire and Aruba are connected with this continent because of the proximity of these islands to South America.

Interesting facts about the cultural geography of South America

The culture of this continent has a great connection with the landscape of this region. First of all, areas of the Pacific coast were absolutely perfect for trading as well as fishing. The Amazon basin was full of significant rivers. The abundance of water was the primary resource for the people of this region with different animals and plants. On the other hand, big Andes Mountain was there to protect the people of this continent.

You must have heard about the Inca Empire. This was one of the most popular South American indigenous cultures. Cuzco city is famous for the Inca Empire because it was established in Peru in the year 1438. Later on, this Empire expanded. Parts of Bolivia, Chile, Colombia, Argentina, and Equator also became the parts of this Empire.

So you can easily understand that communicating in this vast region was not so easy at that time. So the people of Inca started building different roads to boost up their networks. In this way two main roads came into existence. It included one road on the Pacific coast, and the other one is found in the Andes. Inca people also built many inns and forts. Their food storing process, signal towers, and foot Highways will definitely impress you. The Inca used to dominate the western part of South America. That is because they can easily communicate with this part because of these Highways and sites.

That time African slaves were imported in this continent, and the culture of South America was greatly influenced by them. Brazil mostly bought these slaves. That is why you will find the mix of European rituals and Indian believes in their cultural practices.

This particular religious practice is a perfect combination of different traditional beliefs of Africa. Here we see an ideal amalgamation of Bantu, Yoruba and Fon cultures. The priests of this religion used to believe in many Gods and Goddesses. On the other hand, the owners of the slaves of that time and the leaders of the Churches started pressuring the slaves to embrace Catholicism that believed in one God. So over time, Candombles began to believing in Christianity as well.

The landscape was always a predominant part of the historical cultures of this continent. For example, Gaucho culture was found in the region of Pampas. It was also famous as Cowboy culture. You must be wondering why! That’s because in the middle of the 18th century they used to hunt wild horses. This horse wall is found on the grasslands of this region. Gauchos used tallow and hides to make different soaps and candles. Then they used to sell it to the European traders with a hefty price tag.

These people were powerful. They relished freedom and honesty. You can still find this culture in Uruguay and Argentina along with their dresses, foods and songs.

Now let’s take a look at out some of the most visited popular places in South America.

The most abundant salt flat in Bolivia

Salar de Uyuni is one of the most famous destinations in Bolivia. You have to visit the Southwest part of Bolivia to encounter the largest salt flat in the world. If you visit this place in between January to April, you can enjoy the breathtaking view of this 11,000 square kilometres region.

If you are in Peru, you cannot miss the view of the milky way over the beautiful Lake Titicaca. This is the border that separates Peru from Bolivia. Lake Titicaca is not only famous for its magnificent view of the Milky Way but also known to be the birthplace of the famous Incus.

Mount Fitz Roy is one of the most popular places in Patagonia. This is again a border that separates Argentina from Chile. Hiking enthusiasts love to visit this place.

The Galapagos Islands is one of the most famous archipelagos of multiple volcanic Islands. Apart from that, this place is also famous for its variety of wildlife. If you love snorkelling, you cannot miss this sought after location in Ecuador.

Amazon longest river in the world

If you are in South America, how can you miss one of the world’s longest rivers, Amazon? You can simply enjoy a small cruise to explore the nearby remote villages and local people. You will get to know how people spend their life around this beautiful river in South America.

People sometimes get reluctant to visit this beautiful city in Bolivia. But La Paz will give you more than you expect from this city. The colourful and vibrant streets and rich culture will definitely impress any travel enthusiast.

If you want to savour the diversity of Chile, you have to visit this mysterious island. Moai statues have made this island popular. You will be amazed by the different formations of these statues. You can enjoy some time by listening to various myths about these mysterious statues. But the reality is no one knows the real story. It’s still a mystery for everyone.

The most beautiful city in Brazil

You may have already guessed the name of the city. Yes! We are talking about the beauty of Rio de Janeiro. From the awe-striking view of Sugarloaf Mountains to the Redeemer statue, everything attracts people from all over the world.

One of the largest geyser fields in the world

You have to visit northern Chile to enjoy the site of the world’s third-largest geyser field, Geysers el de Tatio. You should visit this place in the morning. When the air is filled with mist, and the sun kisses the mountains, it creates a magical beauty.

Apart from these places, many other mysterious and beautiful sights are located in South America. Its rich history and culture help this continent to create multiple cosmopolitan cities and natural wonders. South American people are deeply connected with the landscape and environment. If you visit this extraordinary continent, your soul can feel the magic and beauty of this place.

BOOK ACCOMMODATION IN ANY COUNTRY OF SOUTH AMERICA

About LK 742 Articles
Hi and welcome to my travel blog! Based in London, I work in investment banking in a quantitative field and although I am not part of the travel industry, I have a ton of passion for travel. My blog is a reference guide for my fellow travelers with the same passion as me. Hopefully the blog is easy to navigate and my aim is to bring the most relevant and interesting information before you begin your journey!

Where is Chile located on the map? Chile South America map

Learn more about Map of Chile, Chile Flag facts and Places to visit. Chile is a long, narrow country of South America surrounded on all its four sides. […]

Where is Aruba Island Located on the map? Aruba Flag picture, maps and facts

Learn more about Map of Aruba, Aruba Flag facts and Places to visit. Aruba is known for the scenic tourist locations that it has to offer. […]