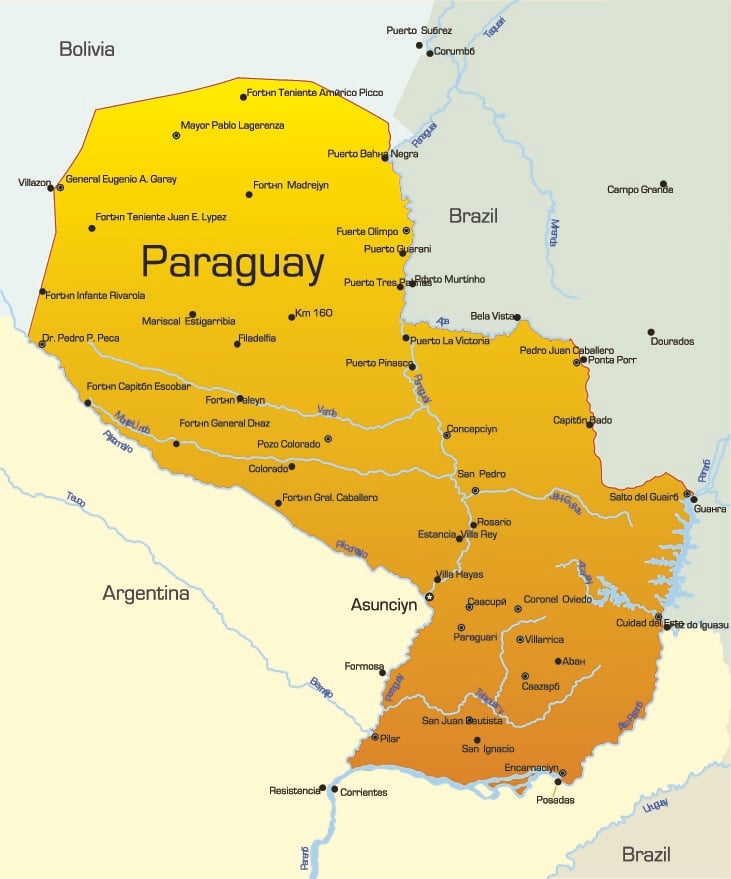 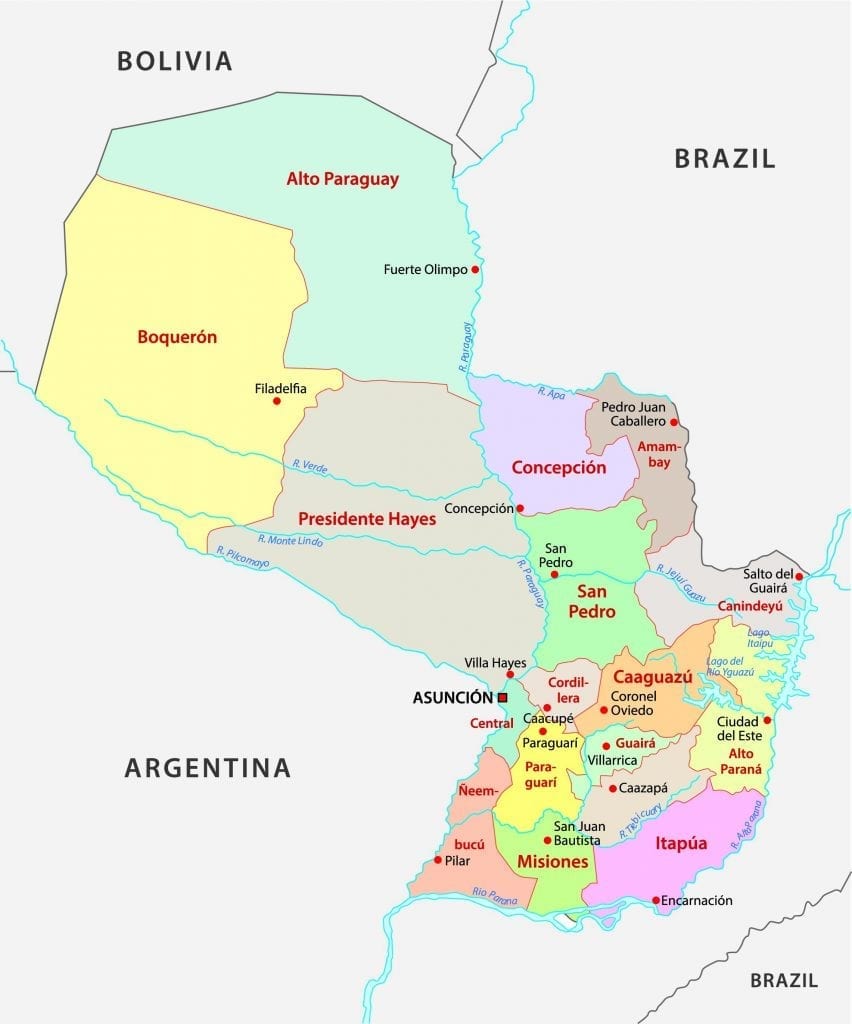 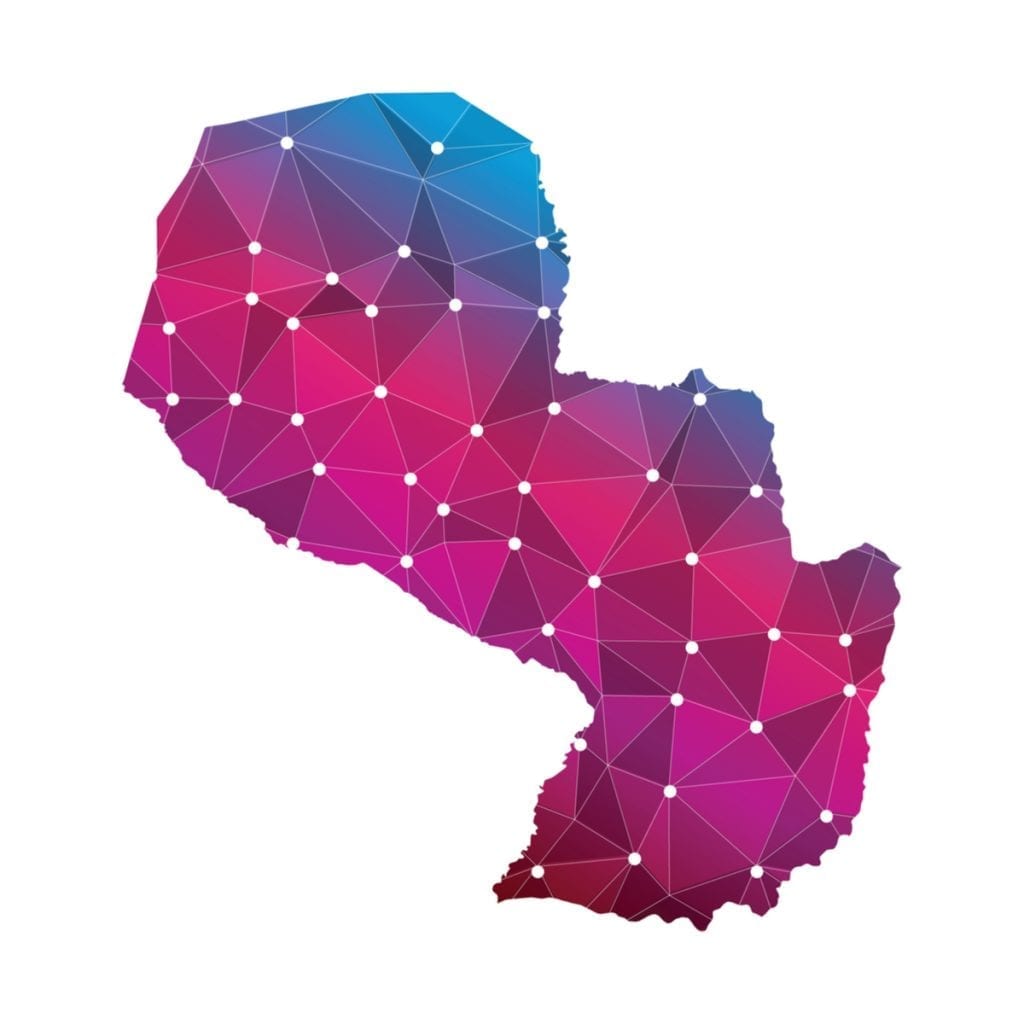 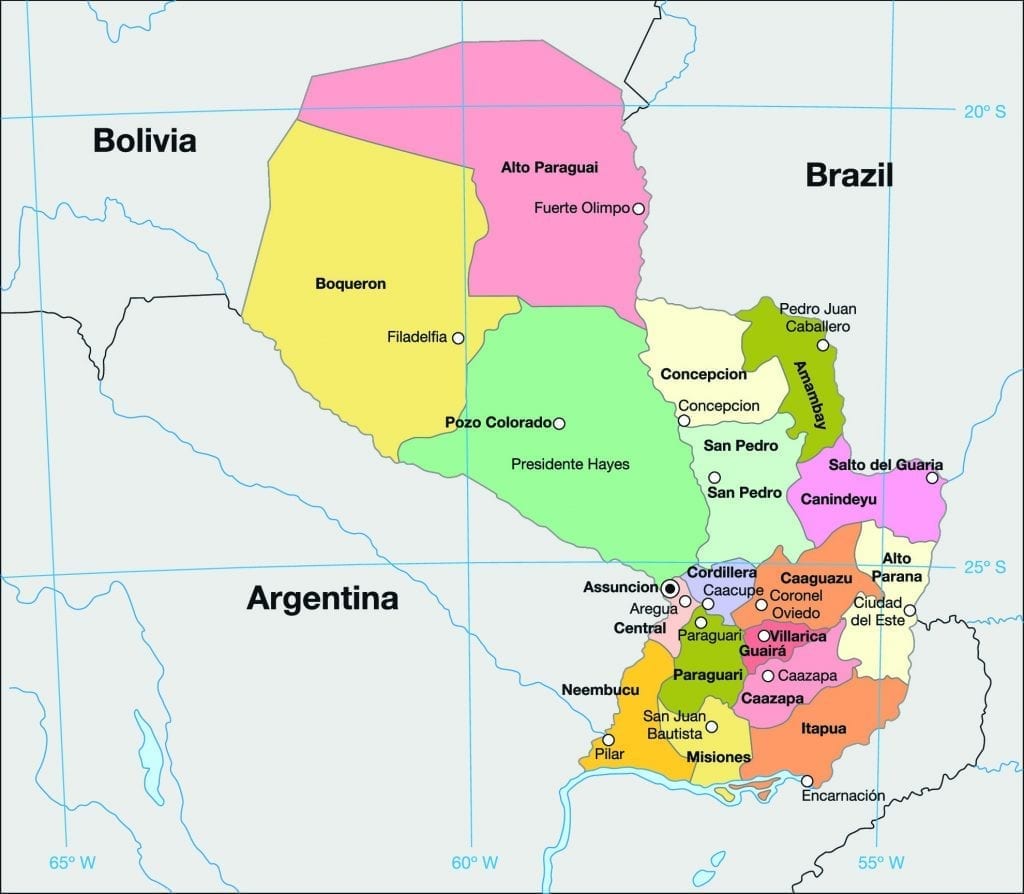 Paraguay has two official languages, which are Spanish and Guarani. This country obtained its name from the Paraguay River. In Guarani, ‘para’ means water, and ‘guay’ means birth. Therefore, Paraguay means ‘born of water.’ Nuestra Señora Santa María de la Asunción or more popularly known as Asunción is the capital and also the largest city in Paraguay. The official currency used here is called the Paraguayan Guaraní (PYG).

What is around Paraguay?

Paraguay shares its borders with three other South American countries. Bolivia lies to the northwest, Argentina lies to the south and southwest, and Brazil lies to the east and northeast.

Paraguay does not have a very diverse landscape. The Paraguay river runs across the middle of Paraguay, dividing the land into two distinct topographies. To the east lies the ‘Oriental Region’ and to the west lies the ‘Occidental Region,’ also known as the Chaco region; it forms a part of the Grand Chaco. Paraguay does not have many mountain ranges. The highest point in Paraguay is the Cerro Pero, which is 842 meters high.

Most of Paraguay’s population lies in the eastern part, which consists of the fertile Paraneña region. This area has beautiful grassy plains and thickly wooded trees. The famous Paraná plateau forms a part of the Paraneña region.

In comparison, the Chaco region is arid and has low marshes. The flatlands of the west are unsuitable for agriculture. The farthest north-western area is a desert.

Paraguay has three major rivers, namely, the Paraguay river, the Paraná river, and the Pilcomayo river. These rivers provide a source of hydro power and transportation in Paraguay. Paraguay has coasts, ports, and beaches on these rivers. The three rivers ultimately flow into the Atlantic Ocean, via other countries, and through the Paraná -Paraguay Waterway.

The climate of Paraguay ranges between tropical and subtropical. Paraguay mostly has wet and dry seasons. The lack of mountains allows winds to blow in from other land areas, sometimes at the speed of 161 km/hr. The months of April to September see temperatures dropping to sub-zero degrees because of the changing winds blowing in from the Andes.

Whereas in summer, the temperature rises as high as 29 degrees C with warm winds blowing in from the Amazon basin. Summer here is from October to March, with January being the hottest month.

Paraguay was inhabited by the Gurani tribe for the longest time. Almost a millennium later, the Spanish explorers landed on the shores of Paraguay in 1516. On August 15th, 1537, Juan de Salazar de Espinosa, a Spanish explorer, founded the first settlement of Asunción, which later became the capital city for the Spanish colonial province of Paraguay.

The spread of Christianity was undertaken by the Jesuits and the Spanish in the eighteenth century. Paraguay, however, overthrew the Spanish administration on May 14th, 1811. José Gaspar Rodríguez de Francia became the first dictator to rule over Paraguay from1814 until his death in 1840.

Rodríguez de Francia strived to reduce the power of the Catholic church and kept Paraguay cut-off from other South American countries. The lack of freedom created many independence-seeking leaders, but Francia managed to stay ahead of them every time.

After Francia’s death in 1840, various military leaders tried to stake claim to rule Paraguay, until Carlos Antonio López came to power in 1841. Carlos ruled until his death in 1862, after which his son Francisco Solano López became the President-Dictator of Paraguay. During their reign, the Lopezs’ opened Paraguay to trade and commerce and also strengthened its military power.

In 1864, Brazil, Argentina, and Uruguay signed a Triple-Alliance Treaty to come together and fight the rising threat of Paraguay. Thus, began the Paraguayan War, which ended with Paraguay losing almost 1 million square kilometres of land to Brazil and Argentina. Paraguay also suffered a loss of 60-70% of its population, making it one of the most gruesome wars of South America.

From 1904 to 1954, there was significant political instability in Paraguay, where leaders kept overthrowing each other by force. During this phase, Paraguay saw thirty-one presidents, the last of which was Alfredo Stroessner. His regime became the most prolonged Dictatorship regime in the history of Paraguay.

Alfredo Stroessner’s regime was overthrown in a military coup on February 3rd, 1989, making General Andrés Rodríguez the next Dictator of Paraguay. Rodriguez brought reforms in the country in 1993. It was the time when the first democratic elections were held in Paraguay.

Paraguay is not the first name that springs up in the minds of travellers. It is one of the least visited countries in the world. However, Paraguay has a few beautiful places for explorers, as listed below. 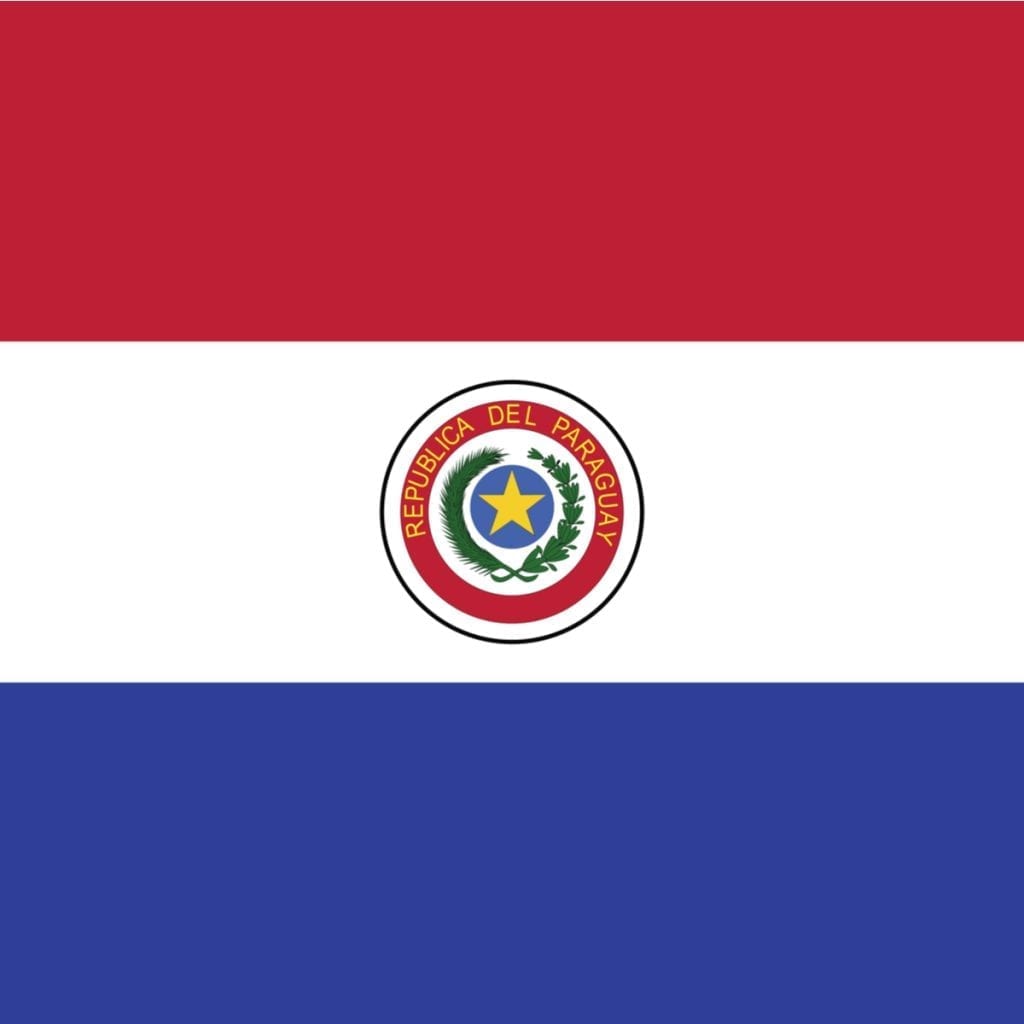 On both sides of the Paraguayan Flag are three equal bands of red, white, and blue. The white band on the front side has the Paraguayan coat of arms in the centre, while the reverse side has the emblem of the seal of the treasury. Paraguay is the only country in the world to have two different symbols on each side of its flag.

The colour of the flag was inspired by the French flag. The red stands for equality, courage, and patriotism, the white stands for peace, unity, and purity, and the blue stands for truth, benevolence, and liberty.

Departments and Capital Cities of Paraguay

Other Important Cities of Paraguay

BOOK ACCOMMODATION IN ANY PART OF PARAGUAY AT GREAT PRICES

About LK 657 Articles
Hi and welcome to my travel blog! Based in London, I work in investment banking in a quantitative field and although I am not part of the travel industry, I have a ton of passion for travel. My blog is a reference guide for my fellow travelers with the same passion as me. Hopefully the blog is easy to navigate and my aim is to bring the most relevant and interesting information before you begin your journey!