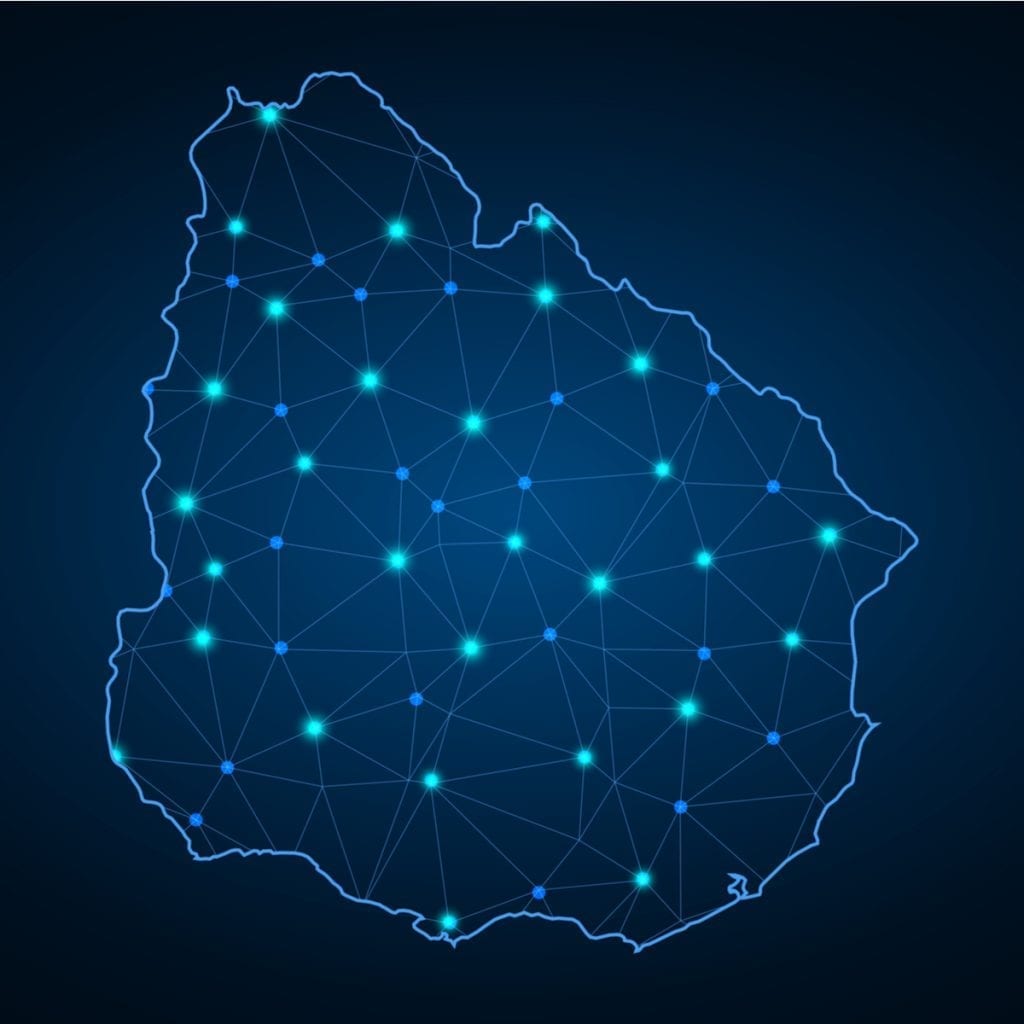 Vector cartoon illustration of the map of Uruguay with the architecture doodle, attractions, landmark symbols. 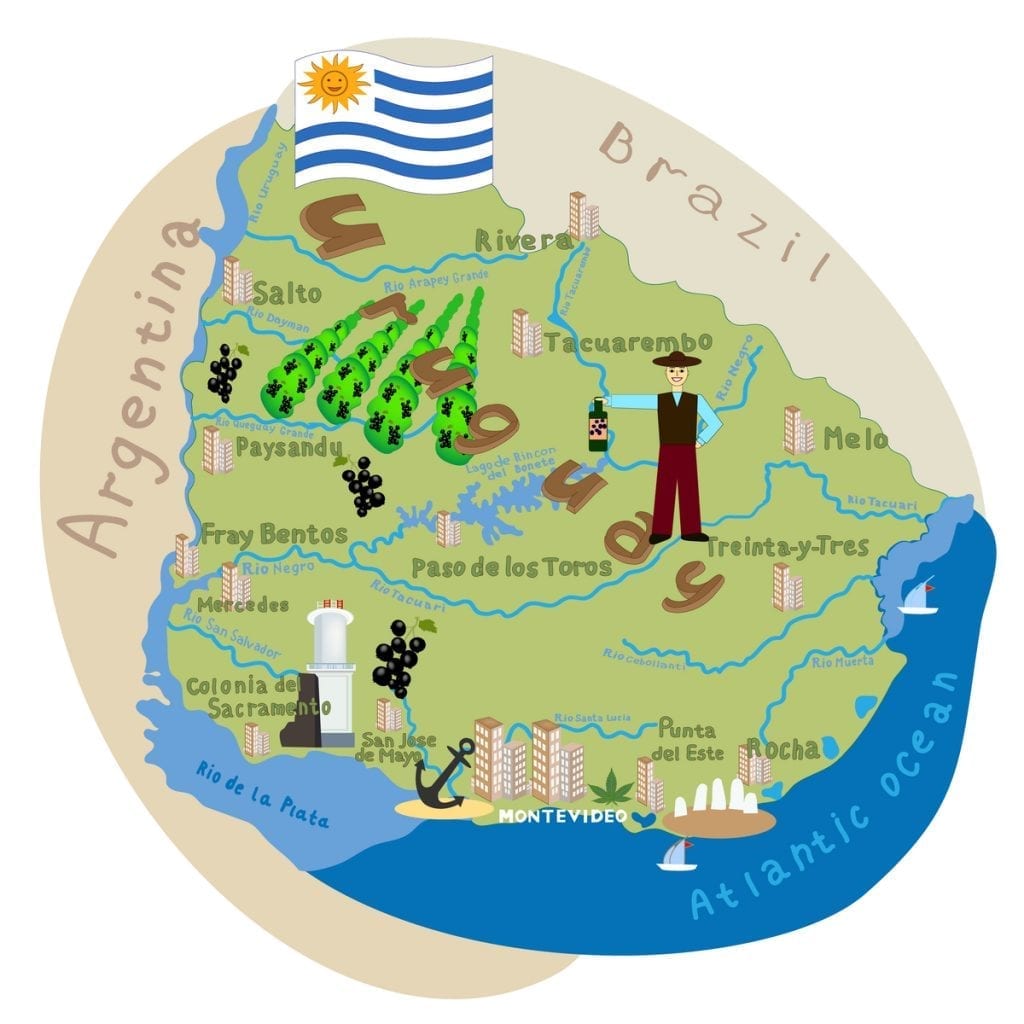 Map of Uruguay with the departments coloured in bright colours and the main cities. 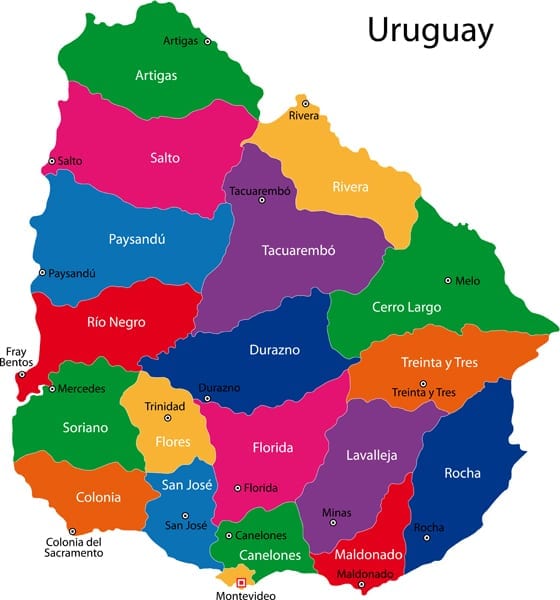 This article explores the beautiful country with a beach-lined coast and luxuriant interior. This country is known as Uruguay which is officially called the Oriental Republic of Uruguay. Uruguay is a South American country and is located on the South Eastern side of South America.

Out of all the countries in South America, Uruguay is the second smallest country on the continent. The country is bordered by Brazil as well as Argentina. Argentina is in the west of Uruguay while Brazil borders its North and also East. Other than the geographical borders, these republics also share certain historical as well as cultural similarities with Uruguay.

Although the country seems small on the map compared to the countries that share borders with Uruguay. However, that is not the case. Uruguay is five times bigger than Holland in terms of the land that both countries acquire. Despite having five times more land, Uruguay has five times less population than that of Holland.

Not only this, but Uruguay has more land than Japan in terms of cultivable land. However, in this case, Uruguay has forty times less population than Japan. The total area on which Uruguay is spread in South America is 176,215 square km out of which 175,015 square km is land while 1200 square km is water. The estimated population in Uruguay is 3.45 million out of which most of them reside in the capital city which is also the largest city of Uruguay known as Montevideo.

The landscape of Uruguay consists greatly of rolling land and the level of elevation is approximately 383 ft. The coastline is characterised by tidal lakes and dunes as there are deposits of sand, clay and also alluvium. Although there is an abundance of water in the country there is no direct river flow in the country.

The coastal low land is quite fertile with a few low hill ranges. The water network that consists of the country mainly includes four river deltas known as the Rio de la Plata Basin, Uruguay River, the Laguna Marin, and the Rio Negro. Other than the Rio Negro, none of the rivers directly enters the country. The black river or the Rio Negro passes through some points of the country.

The climate of Uruguay is not too extreme. The temperature is generally moderate and temperate. It remains relatively mild and also uniform across the entire country. Although there may be some variations in the seasons the variations in temperature are very rare. The country has an abundance of water; therefore, it is common for the country to have increasing fog as well as increasing humidity.

However, due to a lack of mountains, there is no weather barrier. The country is exposed to cold and rapid winds which also causes slight variations in the temperature. The country is vulnerable to these winds at any time of the year. The weather in both summer and winter can differ from the passing day. This is because a hot wind can be followed by a cold wind as well. However, the extreme temperature in the winter months is very rare. The country is neither very dry nor has a prolonged rainy season. Heavy rain occurs during the months of March and April. While the rain is common during the winter season, thunderstorms are more common during the summer season.

The mean precipitation that occurs throughout the year is approximately 1000 mm which is evenly distributed in the entire year. Uruguay is characterised by a warm temperature as freezing or extremely cold temperature in the country is rarely seen. The highest point in the country is Cerro Catedral which is elevated at 514 m while the lowest point is the Atlantic Ocean at 0 m. The tourist season is Uruguay is summer because, at this time, the beaches of Uruguay are warm as well as pleasant. 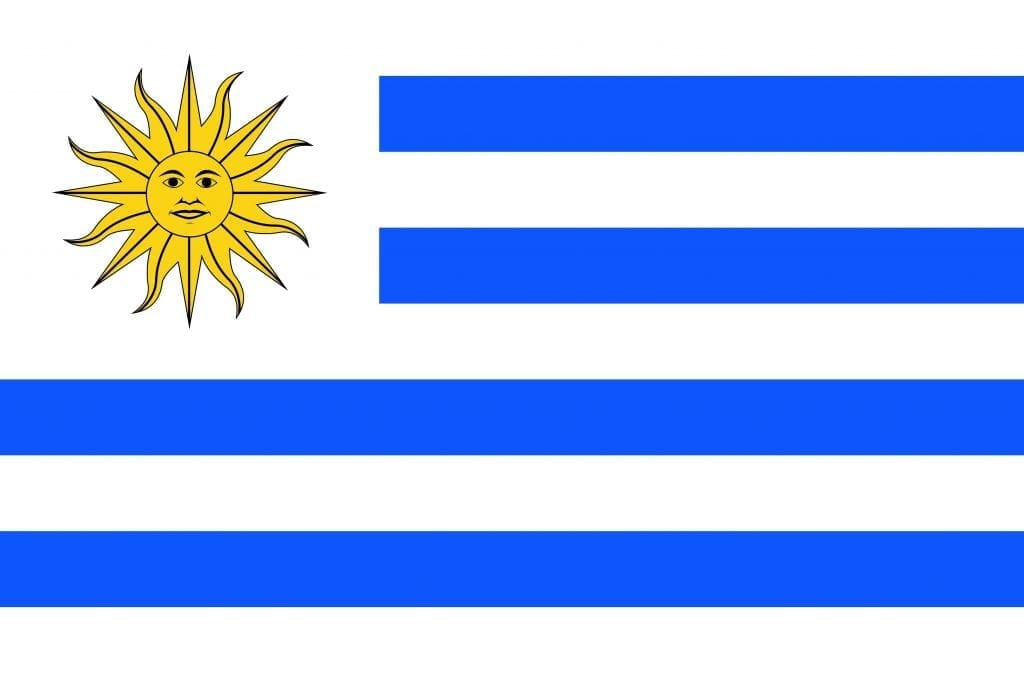 It is considered as a sacred phenomenon that has a lot of significance. It symbolises a particular country and a flag is responsible for providing a sense of nationalism to the people. This feeling of nationalism binds people together. The people are brought closer to each other because of the sense of unity and brotherhood that the flag portrays in them. It is one of those features that allow the people of a country to differentiate themselves from the people of other nations.

Previously, there were nine blue stripes in the flag but they were later changed and reduced to only four stripes. This is because there were some problems in viewing the flag and understanding it from a far distance.

The figurative symbol of the sun has a historical significance. It is known as the Sun of May which is known because of the May Revolution that took place in 1810. This sun represents the Sun God who is associated with the Inca religion. The similar symbol of the Sun of May also appears in the flag of Argentina. The flag of Uruguay was designed by Joaquin Suarez.

Variations in the Flag

One of the greatest civil wars in the history of Uruguay was the Great Siege of Montevideo from 1843 to 1851. At this time, Uruguay had two parallel governments and both of them had their separate flags. One of the governments had the same flag as now but the figure of Sun of May was slightly different, while the other government had the same appearance of the flag as today but the blue colour of the stripes was lighter as compared to now. 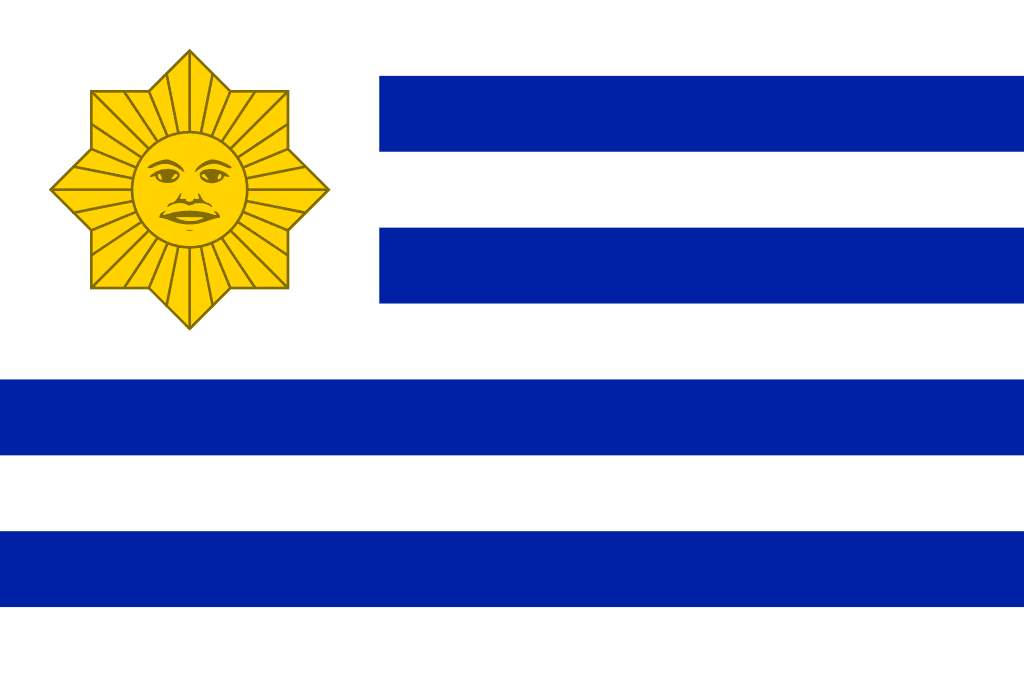 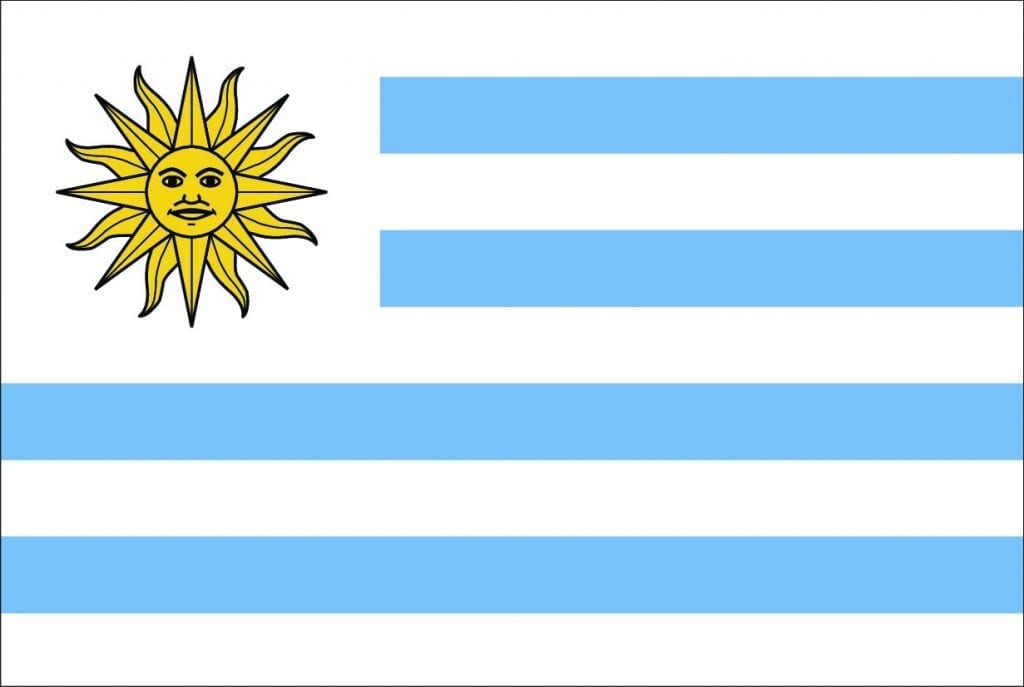 The State flag of Uruguay is also known as The National Pavilion. The nickname of the state flag is the Sun and the stripes. The proportion of this flag is 2:3 and was adopted on 11th July 1830.

Places to Visit in Uruguay

Although the country is very tiny and is often overlooked by the people who usually come to visit its huge neighbours such as Brazil and Argentina. Despite the tiny size of the country, there are a variety of beautiful attractions and places to visit in Uruguay which captures the attention of the tourists. From the luxuriant coastline to the beautiful interiors and the rich culture is not to be missed.

One of the most exciting places to visit in Montevideo which is the capital city of Uruguay and also the city where most of the population of Uruguay reside. This city is known for the history that it has along with some of the beautiful and attractive landmarks that capture the eyes of the tourists. The churches and mansions that exist in Montevideo have been there since the 18th century. They are some of the amazing spots if you are looking for historic places that are equally attractive. Another beautiful landmark in Montevideo is the Art Deco Palacio Salvo. It is a beautiful building that has historic architecture and interesting history behind it.

It is an architectural blend of the style of French, Italian as well as Indian art deco making it one of the most impressive looking buildings of the work. Although, there is work going on to restore the building to its original style but even now the building is a worth visiting to have a look at the ancient architecture that existed even before then we were born.

Another beautiful spot in Uruguay is Carmelo which is located at the centre of Rio de la Plata and Rio Uruguay. It is known to be one of the best tourist places as it is usually crowded with tourists and this is because of the graceful old buildings and the cobbled streets. There is a water front which is one of the best places to walk along with friends or family. The cool breezes make the walk worth a while.

From here, one can also take boat trips to the magical Parana delta which is also an exciting boat ride that is not to be missed. Other than this, there are a variety of other activities and sports that can be carried out here to spend a perfect day with family. There are fishing, yachting and other water sports that will keep the children occupied. With a little bit of everything for everyone, Carmelo is one of the exciting places to visit in Uruguay.

Another beautiful place to visit in Uruguay is Salto that is the second-largest city of the country. It is usually crowded and invites a lot of tourists because many people stop in Salto when they are heading towards Argentina. Since it Is adjacent to Rio Uruguay, Salto becomes one of the highly picturesque points because of the beautiful landscape and luxuriant interiors.

The name of the city, Salto is named because of the famous waterfalls that happen down the city. Other than this, there are lovely walks by the riverside which can be enjoyed with friends and family to double the excitement. There are leafy streets and plazas as well that contribute to the beautiful architecture of the city. It is because of the beautiful interior that makes this city of Uruguay a relaxing one for the residents as well as for the tourists. If you are looking for a place which is calm as well as graceful laden with natural resources, then Salto is the most suitable place for you to visit.

Uruguay is known for the lively festivals that are held throughout the year. One of these is Epiphany which is held on the evening of 6th January. While people around the world are done celebrating Christmas and the New year, the people of Uruguay are preparing for one of the biggest events of the year. It is a huge event in which all the families of Uruguay take part.

They exchange presents and gifts with each other. Also, delicious meals are cooked and exchanged among the families. Other than this, another big event held in the country is the Holy week also known as the Semana Santa. This big event also allows the entire family to take part in the event. It begins on Easter weekend.

At this time of the year, the families visit the homes of relatives and family members. Sometimes, some of the families also go on vacation during this time of the year to enjoy the best time with their family. This is one of the most significant events of the year that is held in the capital of the country that is Montevideo. Grand parades are held in the capital city and people of Uruguay try to enjoy the most at this time along with friends as well as with family and other relatives.

BOOK ACCOMMODATION IN ANY PART OF URUGUAY AT GREAT PRICES

About LK 521 Articles
Hi and welcome to my travel blog! Based in London, I work in investment banking in a quantitative field and although I am not part of the travel industry, I have a ton of passion for travel. My blog is a reference guide for my fellow travelers with the same passion as me. Hopefully the blog is easy to navigate and my aim is to bring the most relevant and interesting information before you begin your journey!

Map of Ecuador in South America and Ecuador flag meaning

Learn more about Map of Ecuador, Ecuador Flag facts and Places to visit. Ecuador is bordered by a variety of countries on most of the sides. […]

Where is Colombia Located on the map? Map of Colombia South America

Learn more about the map of Colombia, Colombia flag facts and best places to visit. Information about the Geography and History of the country. […]