Maryland, MD is a state located in the United States of America. This North American state is located in the Atlantic Region, situated between four states and the District of Columbia.

The rest of the article will go into detail about where Maryland, MD is found, and the best things to do when you are visiting this wonderful state.

Where is Maryland, MD located?

Maryland, MD is located in the Atlantic Region of the United States of America, on the east coast. Maryland sits at a latitude of 39.0458 degrees and a longitude of 76.6413 degrees.

Where is Maryland, MD on a US map? 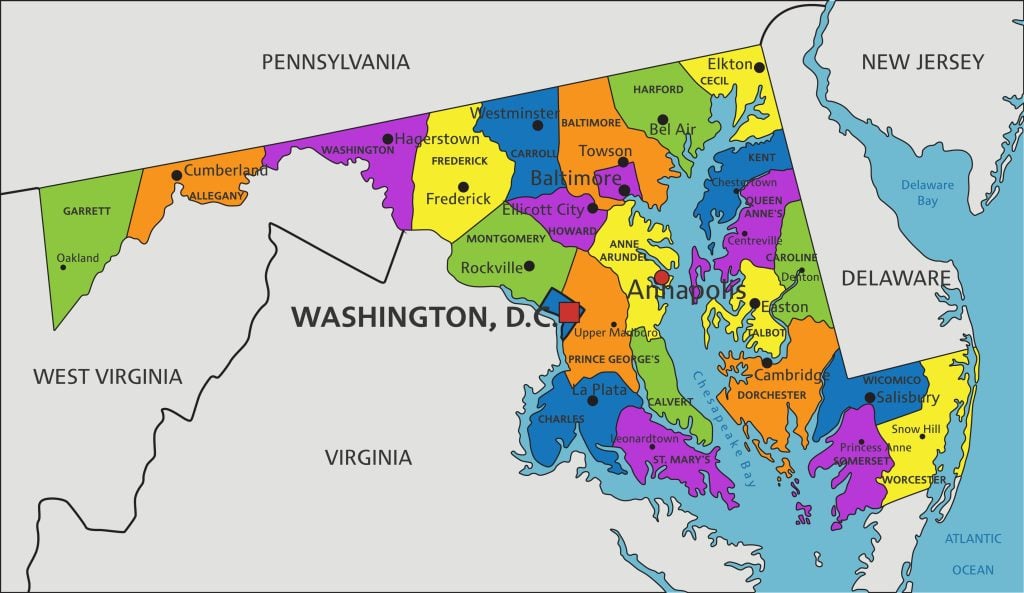 Maryland borders four states, with Pennsylvania to the north, Delaware to the East, and Virginia and West Virginia to the southeast. The District of Columbia is also situated along the state.

What is the geology of Maryland, MD?

Maryland is home to a large variety of geology and landforms. It is made up of six physiographic provinces, including the Atlantic coastal plain, piedmont, blue ridge, ridge and valley, and Appalachian Plateaus.

These are where climate history has resulted in landforms that are different from adjacent areas.

What is the climate of Maryland, MD?

The climate in Maryland is generally separated into two.

In the highland west, the climate is continental. There, the temperature records usually vary from -40°F to more than 100°F. Average temperatures in western Maryland are about 65°F in July and 28°F in January.

To the east, Maryland has a humid subtropical climate. This is influenced by the Chesapeake Bay and the Atlantic Ocean, which both have moderate weather. Average temperatures here are 75°F in July and 35°F in January.

What is the capital of Maryland, MD?

Annapolis is the capital of Maryland. It is located at the center of Maryland’s Western Shore and is about 25 miles from Baltimore, and 30 miles from D.C. Annapolis has a population of 39,278.

What are the sports teams of Maryland, MD?

Maryland has a wide range of much-loved sports teams and is home to multiple major and minor league sports franchises.

Where can you hike in Maryland, MD?

Maryland is home to some amazing views, and is a great place for people who love hiking! Here are some amazing trails you can find in Maryland.

This trail is a moderate, 5.1-mile trail near Boonsboro, Maryland. Hikers will experience an elevation gain of 816 feet. This hike features wildflowers, rock climbing, and wildlife. Views include Greenbrier Lake and Black Rock Cliff.

This trail is a moderate, 3.9-mile trail near Marriottsville. Hikers will experience an elevation gain of 341 feet. The hike features a river, camping, bird watching, wildlife, and will give hikers a wonderful view of the rapids.

How big is Maryland, MD??

Where should you go in Maryland, MD?

Maryland has so many amazing places to visit! Here are a couple of top-rated places to go if you decide to come.

Ocean City: A top tourist and vacation spot in Maryland, Ocean City is one of the best destinations to visit within the state.

It features a 10-mile long beach with beautiful sunrises, and a wonderful boardwalk full of much-loved bars, restaurants, candy shops, and souvenir shops. On top of this, the boardwalk also features amusement park rides, arcade games, and Ripley’s Ocean City.

Annapolis: Annapolis is a wonderful place to get out on the water! On top of being Maryland’s state capital, it is also considered to be the Sailing Capital of the U.S. and provides so many opportunities to explore by boat.

It is also home to the United States Naval Academy campus and Historic Annapolis. There, visitors can find art galleries, shops, and wonderful restaurants.

Baltimore: Baltimore is a wonderful city with a plethora of attractions. If you love museums, Baltimore is home to the Baltimore Museum of Art and the Walters Art Museum.

The Inner Harbor is home to the beautiful Baltimore Aquarium, too! Additionally, sports lovers will go crazy for a Ravens game at M&T Bank, or an Orioles game at Camden Yards.

Assateague Island: This island is home to wild horses, and you can also enjoy swimming, surfing, beachcombing, surfing, fishing, and sunbathing! It’s a wonderful place with beautiful scenery, and the perfect destination to just get away for a little while.

What are some fun facts about Maryland, MD?

US STATES MAPS AND FLAGS

Interesting Things to know about Maryland

What is Maryland Known for?

This article talks about the largest, best, and richest counties within the state of Florida. It provides a list of all of the counties and gives information on attractions and the counties’ […]

Map of Oklahoma and Flag. Outline, Counties, Cities and Road Map. Oklahoma is a beautiful state to visit or live in that offers many attractions. Here are some interesting facts that will surely surprise you. […]